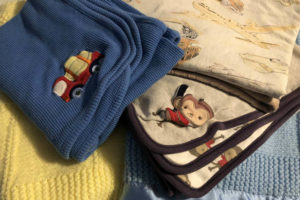 Colleen McCormick and Don Hudson were taking off from an airport in Mexico with their children last week when their plane started shaking and crashed. They suffered minor injuries—and Colleen lost her glasses in the crash—but they and their children managed to escape.In fact, all 103 people on board the plane got off and away from the plane, sliding out of the plane, dodging hail, and running through wind and brambles to get to safety. That seems miraculous on its own.

Don and Colleen—whom I met when we were students at Roland Park Country School—lost almost all their luggage in the fire after the crash, including some personal items that are irreplaceable.

Meanwhile, their sons were left without their treasured blankets. Their 3-year-old daughter Aela was holding her blankie during take-off, so she carried hers off the plane, but her big brothers, Camden (5) and Declan (7), had left theirs behind.

So their father reached out to The Dad Network, a Facebook group for dads, to see if he could track down replacement blankets for his sons. Nicholi Long, one of the admins for the group, had been trying to figure out how to help.

“It felt like we were supposed to do something for him,” Nicholi said. When he saw Don’s post in the group, asking for help finding matching blankets for the boys, Nicholi had his answer. His son owned a baseball blanket like the blanket Don was looking for.

“I immediately lit up, as I knew we had the baseball match. My wife and I were over the moon excited about it,” Nicholi said. “The next part was the challenge of asking my almost 5-year-old son, Landon, if he would be willing to give the blanket to a boy who really needed it. His response with a huge grin was, ‘Yes, he can have it!'”

Nicholi looked for the other blanket on eBay and found a similar one. On Monday Nicholi and his family delivered the blankets to Camden and Declan in Portland, Ore., where they are safely home.

The story of Don and Colleen’s experience with the airplane crash is a nightmare. I don’t even want to imagine trying to get my family safely out of a burning plane. The idea of doing that while injured and without my glasses is petrifying.

In the face of tragedy, though, I love that another family—and especially one little compassionate boy—found a way to help that is so, so important to these two little boys. They’ve just survived this horrifying experience. But at least they have their blankies back—or close enough replacements to bring some reassurance at a difficult time.

What a small but important act of love.