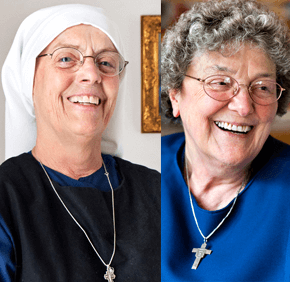 As early as 4:30 every morning, two women separated by more than 150 miles are already awake – intensely praying in quiet solitude for the intentions of Archbishop William E. Lori and the dozens of special requests they receive every week from people across the Archdiocese of Baltimore.

Sister Marie Teresa of the Child Jesus and Mother of the Eucharist and Sister Maria Veronica of the Holy Face are two “canonical hermits” whose lives are dedicated to an intense spiritual regimen as they live apart from the world inside hermitages in Cumberland and Essex, respectively.

The hermits made their final perpetual vows of poverty, chastity and obedience this year after several years living under temporary vows.

Capuchin Franciscan Father Gregory Chervenak, pastor of Our Lady of the Mountains in Cumberland, accepted the vows of Sister Marie Teresa during a June 12 liturgy at the Shrine of Ss. Peter and Paul in Cumberland. Bishop Denis J. Madden accepted the vows of Sister Maria Veronica during a Sept. 15 liturgy at the Basilica of the National Shrine of the Assumption of the Blessed Virgin Mary in Baltimore.

Both hermits wear religious habits and fall under the direction of Archbishop Lori. They do not have much contact with the outside world.

“It is a radical way to live – a life of assiduous prayer and penance,” said Sister Marie Teresa, who resides at St. Gemma’s Hermitage in Cumberland. “We do it out of love for Jesus Christ and his church. We are set apart.”

Sister Marie Teresa is a former nurse who was born Marie Laura Tellier. She had lived privately as a hermit for 10 years in Western Maryland before undergoing the formal process of becoming a diocesan hermit recognized by the church.

Sister Maria Veronica, who lives at Our Lady of Guadalupe Hermitage in Essex, is a widow, mother and grandmother. The former Mary Zimmerer’s hermitage chapel is located in the same room where her husband of 39 years lost his battle with cancer.

“There is a rhythm to the day, but each day is different,” Sister Maria Veronica said. “There’s time for prayer, study and spiritual reflection.”

Each day, the hermits attend Mass at local parishes. They say the prayers of the church throughout the day and practice personal spiritual devotions such as the rosary and the Chaplet of Divine Mercy.

One of the challenges of living as a hermit is making time for the many chores that must be completed in keeping up the hermitage, said Sister Maria Veronica, who also offers spiritual direction to people of all ages.

Both hermits said prayer has the power to change lives, viewing their vocation as one focused on union with God.

“Prayer might turn around a soul to say no to temptation,” said Sister Marie Teresa, an artist who makes religious icons and who prays in a special way for seminarians and priests.

There is some confusion about what a hermit is, according to Sister Marie Teresa and Sister Maria Veronica. While many are supportive, some can be dismissive.

“Someone said to me, ‘You don’t do anything,’” Sister Marie Teresa recalled. “I said, ‘OK, tell that to Jesus.’”

To be a hermit requires great discipline and commitment, she said.

“It’s a life of sacrifice,” she said.

Sister Maria Luz Ortiz, Archbishop Lori’s delegate to religious and a Mission Helper of the Sacred Heart, said there are two men – one in Catonsville and another in Emmitsburg – who are currently in the process of applying to become hermits.

The vocation is an ancient one that has its roots in the desert fathers of the church.

“The greatest gift of their vocation is to pray for the archbishop and the church,” Sister Maria Luz explained. “People are always giving them intentions. Prayer is their main activity.”