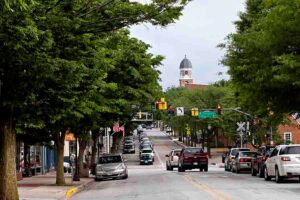 As a kid, I had a trick up my sleeve. When friends would visit to play, I used to say, “I bet you I can kick this ball into the next county!”

And I could, as our property border serves double duty, as the line between Baltimore and Carroll counties.

My childhood home sits in a ZIP code that holds a cluster of closed restaurants; merged fire stations and post offices; farms neighboring homes occupied by professionals; and towns that became areas as road systems improved and the rail industry made fewer stops. We’re not as rural as some parts of Maryland, but too far out to be suburbia.

The area next to ours is “Boring” – literally. It was actually named after its first postmaster (the post office has since closed), but if the shoe fits …

When my parents moved there, they had the choice of communities in which to immerse themselves. They chose Carroll County – and so do I – with good reason.

Every so often, Carroll County finds itself on the Baltimore news feed.

Most recently it was for putting a hold on school field trips to Baltimore City. Thankfully, a solution was reached. Officials from Carroll County, who had were concerned for the safety of their students, worked with officials from the city to develop new procedures and safeguards, resulting in a lift of the ban. A few years ago it was graffiti that read “no illeagles here” (yes, that was the spelling used) on a proposed shelter for undocumented immigrants.

I’ve read opinions where writers highlight their Baltimore – the one not shown in the news – in order to help others see the good. In the same way, let me tell you about my Carroll County. I think it’s beautiful, and in more ways than just the scenery.

Our local newspaper often includes benign stories. When I’m shopping in town and leave something valuable on the car’s front seat, chances are that it will still be there when I return. Hardly a fair-weather day goes by where I don’t hear gun shots, but the targets are clay, paper and metal. Many times, I’m the one doing the shooting.

Our version of a traffic jam is getting stuck behind a combine on a road that is a little too twisting for passing.

Where I live, St. John Parish in Westminster is a stronghold. Just as those inside the Beltway might be familiar with the Baltimore Basilica, non-Catholics are familiar with the church. Though one of the largest in the archdiocese, our church community is tightly knit. It is home to many outreach efforts that support those in need, spiritually and physically.

Like other local jurisdictions, the area is rich with history. I spent my childhood volunteering at the Carroll County Farm Museum, which is home to one of the first mail delivery wagons. Carroll was the first county in the nation to implement Rural Free Delivery mail service.

Some of my childhood friends come from families that have been in Carroll County for generations. There were also those of us whose parents put almost everything on the line to move out of the city, so that we wouldn’t grow up surrounded by concrete, steel and those neighborhoods where violence is prevalent.

I hope that children in the city have the opportunity to run in the fields, breathe the air and enjoy everything that my county has to offer. I also hope that children from Carroll County will be able to explore the culture and history of the city in a safe and secure manner.

When we choose to stay in our own little world, it’s not because we are hateful or uneducated or racist. Some like the hustle, bustle and skyline. I’ll take the calm, rolling hills and serenity.