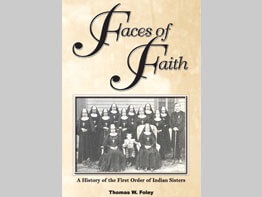 When 12-year-old Thomas Foley opened a shoebox in his Aunt Mame’s closet more than 65 years ago, he unwittingly uncovered the building blocks for a remarkable story of faith, courage and determination.

The box contained the personal journals and papers of Father Francis M. Craft, a 19th-century missionary to American Indians who died in the arms of Mr. Foley’s father in 1920.

The treasure trove of documents included a letter from Sitting Bull and handwritten religious vows taken by young Lakota Sioux women, along with a photograph of Father Craft.

The boy’s discovery was the first step in what would become a lifelong quest to learn more about an independent-minded, forward-thinking priest and the first women’s religious order for American Indians he founded. His research took the author to monasteries and Indian reservations in the Dakotas, and archives in Washington, D.C., New York, Belgium and Rome.

In “Faces of Faith: A History of the First Order of Indian Sisters,” a newly released book published by Baltimore’s Cathedral Foundation Press, Mr. Foley tells the story of how the Congregation of American Sisters came to be, its many struggles and its ultimate dissolution.

“Father Craft was way ahead of his time,” said Mr. Foley, who wrote a biography of Father Craft in 2002. “He was a medical doctor and he taught these women nursing skills. Father Craft’s sisters were among the people.”

Father Craft, part Mohawk, had a fundamental respect for American Indians and treated them with dignity, according to Mr. Foley.

“If you look at the pictures of his sisters, they look like pictures of sisters anywhere else in the world,” said Mr. Foley, a retired labor-personnel executive who lives in Georgia. “He was presenting these sisters as equal to any coming out of St. Patrick’s cathedral.”

An Episcopalian convert to Catholicism and a former soldier who enlisted at age 10 in the Union Army during the Civil War, Father Craft joined the Jesuits in 1876. He left the religious order to become a missionary to American Indians and was ordained in 1883.

Father Craft, who was injured in the Battle at Wounded Knee, first served in the Dakotas on the Rosebud Reservation before moving to Standing Rock Reservation and then Fort Berthold. He often butted heads with religious and governmental authorities, some of whom regarded him as eccentric crank.

The Congregation of American Sisters grew to about a dozen sisters at its height in the 1890s, but ultimately ended as St. Katharine Drexel’s religious order devoted to American Indians and African Americans increased in popularity. St. Katharine funded her outreach with a $15 million inheritance.

Asked what he wanted readers to remember from his book, Mr. Foley choked up for a moment before responding.

“There’s a place and a time where people embarked on heroic efforts and 100 years later, no one knows or cares,” he said. “They tried so hard for a decade. I want people to know what they tried to accomplish.”