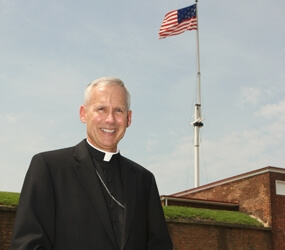 On one of the bloodiest days of the Iraq War – April 9, 2004 – Father F. Richard Spencer became the link between this world and the next for many of the mortally wounded.

Insurgents had attacked a large convoy of gas trucks that Good Friday, firing multiple mortar rounds at a United States base on the outskirts of Baghdad International Airport. Father Spencer, a U.S. Army military chaplain, administered the sacrament of the Anointing of the Sick and prayed with men and women whose faces wore what he remembered as glazed looks of shock and disbelief.

“In the moment, you do your prayers, then move to the next situation, because it’s continuous chaos,” said Father Spencer, then attached to the Army’s 1st Calvary Division.

“You just offered prayers that they would see the face of God that very day and you trust and hope,” he said. “We had both Iraqis and Americans die. I didn’t know who was Muslim or who was Christian – but they all got a prayer.”

Once Father Spencer and his soldiers made it into a concrete bomb shelter, he stood on a trash can and offered general absolution as the shelling continued.

“It was a life-changing day for me,” he remembered. “Our men and women in uniform are able to face hardships and they’re trained to make good decisions in the midst of chaos. Their resiliency is inspiring.”

Father Spencer is about to expand his service to U.S. military men and women around the world.

In May, Pope Benedict XVI appointed him to be the next auxiliary bishop of the Archdiocese for U.S. Military Services. The 59-year-old Baltimore priest will be installed Sept. 8 during a 2 p.m. liturgy at the Basilica of the National Shrine of the Immaculate Conception in Washington, D.C.

Remaining on active duty, the Alabama native will become the first auxiliary bishop for the U.S. military archdiocese able to enter war zones. He will have unprecedented access to military personnel serving in most difficult circumstances.

“I have known Father Spencer well for many years, first in my capacity as archbishop for the military and now as Archbishop of Baltimore,” Archbishop Edwin F. O’Brien said. “We are proud the Holy Father has chosen him, one of our own, to continue serving our brave and generous women and men in the military.”

Bishop-designate Spencer is humbled by the appointment. He believes his experiences in the Baltimore archdiocese, as a pastor of St. Peter the Apostle in Oakland, associate pastor and director of the Monsignor O’Dwyer Retreat House in Sparks, have given him invaluable pastoral experience.

“I will listen that I may serve” will be his motto – borrowed from the late Archbishop William D. Borders, a World War II Army chaplain and one of Bishop-designate Spencer’s spiritual mentors. He prays he can live up to it.

When Bishop-designate Spencer’s parents migrated from Wisconsin to Alabama in the 1940s, they faced discrimination because of their Catholic faith. They were only allowed to live on one street – “Canon,” which had originally been named “Catholic Street.”

“I remember playing baseball in a friend’s yard and his mother coming out the back door and informing me that I could not stay and play because I was Catholic and would be a bad influence,” he recalled.

With a heart for service, he transcended those religious barriers. He was an altar boy and an Eagle Scout. At Jacksonville (Ala.) State University, Bishop-designate Spencer earned a degree in law enforcement and served in Kappa Sigma, the social service fraternity.

“All those experiences were stepping stones toward the expression of service found in ministry and the religious life,” he said.

Commissioned an Army officer in 1973, he went on active duty a year later. For eight years, he served as a military police officer.

In 1980, Bishop-designate Spencer traded in his military uniform for a Franciscan habit. Having always been interested in social justice, he became a religious brother with the Order of Friars Minor.

In his first year as a Franciscan brother, Bishop-designate Spencer ministered in New York with Dorothy Day, founder of the Catholic Worker Movement.

“I washed dishes at the soup kitchen side-by-side with her,” he said.

Bishop-designate Spencer, who later ministered as a counselor in prisons near Boston, acknowledged that it was highly unusual for a former military man to be so closely connected with the Catholic Worker Movement, recognized for its strong anti-war and pro-peace activism. His fellow Franciscans gave the young brother a nickname: “Captain.”

“We would sit around at nighttime on the floor and (the Catholic Workers) would run the printing presses of their newsletter,” the bishop-designate remembered. “We had wonderful conversations – challenging, enlightening and encouraging.”

It was his service as a brother that inspired him to become a parish priest. Bishop-designate Spencer turned to the Archdiocese of Baltimore, a Catholic community he had known while stationed at Fort Meade. Conversations with Archbishop Borders convinced him that he was meant for the priesthood, and he entered St. Mary’s Seminary and University in Roland Park.

“Archbishop Borders was so gentle in his ways,” he said. “He was able to balance a life of activity with contemplation.”

After serving as associate pastor of Sacred Heart, Glyndon, and as director of the Monsignor O’Dwyer Retreat House, Bishop-designate Spencer was accessioned to the U.S. Army Reserves as a battalion chaplain, serving with the 92nd Field Hospital in Baltimore and later with the Aviation Brigade, Maryland Army National Guard. He completed the Chaplain Officer Advance Course in 1994, and served a deployment in Bosnia. Bishop-designate Spencer was then appointed pastor of St. Peter in Oakland, a post he held until 1998.

Ministering in Mountain Maryland was challenging. Bausch and Lomb had left the region for Mexico, leaving many unemployed. Bishop-designate Spencer worked with area faith leaders to support soup kitchens and other outreaches. He is particularly proud of an ecumenical youth ministry started in the area.

“That brought such great joy because the young people came together in plays and skits,” he said. “They were performing ministry through the arts.”

Bishop-designate Spencer was inspired by Western Maryland’s natural beauty and the deep-held faith of its people. He keeps in contact with longtime friends from the parish.

“Families are still inviting me to be part of their family,” said Bishop-designate Spencer, a swimmer and scuba diver who often took advantage of Deep Creek Lake. “That’s a support to any priest because they are our family. That sustains me.”

He returned to active duty in 1999, serving as a military chaplain in South Korea and Egypt. In 2001, he was assigned to the Pentagon Office of Army Chief Chaplains. It was there he came face-to-face with terror.

After a hijacked airliner with 64 people aboard plowed into the western wing of the Pentagon Sept. 11, 2001, Bishop-designate Spencer made his way to the disaster site. He spent two weeks facing some of the most harrowing challenges of his priesthood – entering the burning building to be with troops as they collected bodies, praying over the dead and consoling survivors.

Robert J. Jenkins, a Protestant chaplain, told The Catholic Review at the time that he witnessed a “deep spiritual strength” in Bishop-designate Spencer’s eyes as the two went about the grisly task of praying over bloodied, lifeless bodies. With the priest in army boots and the minister in low quarters (footwear), they stood in four inches of tainted water, offering a blessing over each body uncovered in the ruins.

“Even though here were people who were wounded physically, emotionally and challenged spiritually,” Bishop-designate Spencer said, “they reached back to their faith as a source of stability.”

He concelebrated a Mass at Church of the Resurrection in Laurel, then his residence, in honor of all who lost their lives.

Bishop-designate Spencer was on pilgrimage with military pilgrims in Lourdes, France, in May, when Archbishop Timothy P. Broglio of the Archdiocese for U.S. Military Services told him of his new appointment.

“I told the archbishop that he had the wrong Father Spencer,” Bishop-designate Spencer remembered with a laugh. “The one he was looking for was my brother, Father Robert Spencer (a U.S. Navy chaplain).”

The spiritual shepherd said he is most looking forward to “continuing to tell the story of Jesus and to live his messages of peace and forgiveness through word and action. … I have always viewed and envisioned my life as a mendicant missionary preacher – without roots and constantly on the go to engage and to help reform.”

The white-haired priest will serve the spiritual needs of men and women in uniform and their families in the Army, Air Force, Navy, Marine Corps, Coast Guard, Veteran’s Administration hospitals and centers, and State Department personnel living overseas.

The military archdiocese ministers to 220 installations in 29 countries, medical patients in 153 veteran’s administration centers and all federal employees serving overseas in 134 countries – more than 1.5 million people.

“(Bishop-designate Spencer) brings to his new ministry a wide variety of experience in many fields,” Archbishop Broglio said. “That experience will certainly contribute to the richness of the episcopal ministry to which he is now called.”

He will live at the American seminary in Louvain, Belgium. Archbishop Broglio has asked him to be responsible for all of Europe and Asia. Although not fluent, Bishop-designate Spencer understands German and some Korean.

“I speak English, Southern and a little ‘Bawlmorese,’ ” he said with a laugh. “I intend to continue to work on my German.”

Bishop-designate Spencer called it a blessing to become the first auxiliary bishop able to enter war zones. He will transition from the regular Army to the Army Reserve, and expects that he will spend Christmas, Holy Week and other special occasions on the ground in war zones.

He hopes more bishops will dedicate more priests to serve as military chaplains. The army alone needs 314 priests to provide the sacraments once a week around the world, he said. It has 98.

“If every bishop could dedicate one priest a year to the military,” he said, “that would make a significant difference. I guarantee that each bishop and each diocese would be blessed for that generosity.”

“I stand in the gap as a servant of God,” he said, “to try to bring awareness, understanding, compassion and forgiveness in the midst of the sin of war.”

Bishop-designate Spencer called it “overwhelming” to think about becoming a bishop.

“I’m a little nervous, for sure,” he said. “I want to serve God and serve the people. I’m thankful for the health I have now and the energy I have to engage in this ministry. It’s such an honor to serve our church through the military.”