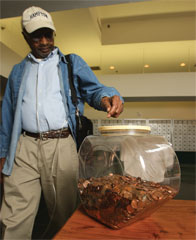 As a resident on a limited income at Catholic Charities’ Basilica Place Apartments Senior Housing facility in Baltimore, 73-year-old Herb Johnson doesn’t have a lot of change to spare.

However, when the residence coordinator of the place he has called home for the past six years called on occupants to collect pennies for the Fuel Fund of Maryland, Mr. Johnson happily handed over his stash of copper-colored coins.

“It may not be a lot of money, but it’s a little bit of something that can add up to a lot if enough people contribute,” he said. “I’ve benefited from the Fuel Fund in the past myself. We like to be a part of something where we can give something back.”

Basilica Place Residence Coordinator Donnet Lawrence set out a large penny jar at the facility in February and alerted the seniors in the monthly newsletter about the fundraising program for the nonprofit organization that assists low-income Marylanders with their gas and electric bills.

“I saw that the Fuel Fund was collecting pennies, and the gas and electric rates are so much higher this year, I really felt like we should answer their call for help,” Ms. Lawrence said. “The response from our residents has been tremendous, as I knew it would be. We haven’t raised a whole lot yet, because our residents don’t have a whole lot to give, but almost everyone here is giving what they can.”

More than 2,000 pennies have been collected in the month since residents began plunking their coins in the Fuel Fund jar, and Ms. Lawrence hopes that number will increase each month.

It’s not surprising to Fuel Fund Executive Director Mary Ellen Vanni that Basilica Place residents – many of whom are past recipients of the Fuel Fund – are giving the little extra they do have.

“This is always a very humbling experience, to receive gifts from individuals who are constantly thinking of the needs of others who are less fortunate than themselves,” Ms. Vanni said. “They are very sensitive and sympathetic to the different ways life can take unexpected turns.”

“God tells us we should help out the less fortunate,” Ms. White said. “If enough of us can scrape together the little we have, we can all make a difference. It makes us feel good and it is part of the Gospel message.”