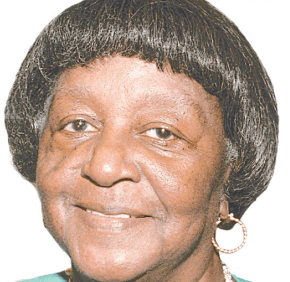 St. Francis Xavier Church in East Baltimore bade farewell July 28 to the scholar who made its rich history come alive.

Agnes Kane Callum, whose interest in her family genealogy dovetailed neatly with her research into the nation’s first parish for black Catholics, died July 22 at age 90.

Josephite Father Xavier Edet, parish administrator, offered a funeral Mass that was attended by office-holders, foundation directors, assorted Oblate Sisters of Providence and Callum’s fellow parishioners – all whose paths she had crossed and enriched.

The opening hymn, “Blessed Assurance,” had particular resonance when soloist Sonya Johnson, sang, “I have a story …”

Callum wrote many “Africentric” columns for the Catholic Review, when the paper was a weekly and it included that feature, courtesy of what is now the archdiocesan Office of Black Catholic Ministries.

She especially enjoyed leading Baltimoreans on an annual pilgrimage to Southern Maryland, where her family tree and the Catholic faith’s roots in Colonial America both date to the 17th century.

Her paternal grandfather, Henry Kane, was born a slave at Sotterley Plantation, in St. Mary’s County, in 1860. In 1896, he became a member of St. Francis Xavier in Baltimore, which had been established four years after his birth.

Both the parish and plantation relied heavily on her painstaking research. She was invited in 1990 to join the Sotterley Foundation Board, which in 2012 made her its first Trustee Emeritus.

According to an obituary prepared by her family, Callum was educated in Baltimore City public schools and was 44 when she entered Morgan State University in Baltimore.

One of her undergraduate papers was titled “The Acquisition of Land by Free Blacks in St. Mary’s County, Maryland.” A Fulbright-Haynes Scholar, she studied at the University of Ghana.

Callum was a licensed practical nurse, but never worked as one. She did hold down jobs in sales, as an insurance agent, and for the Post Office, where she didn’t mind the graveyard shift because it allowed her to study and do research during the day.

She was a founding member of the local Afro American Historical Genealogic Society, which in 2007 was renamed the “Agnes Kane Callum Chapter.” A year earlier, she had donated her archives to the Reginald F. Lewis Museum of Maryland African American History and Culture in Baltimore.

Sylvia Cooke Martin, a fellow historian and genealogist, spoke to worshippers of Callum’s standing in those fields.

A community activist, Callum had the ear of mayors. Her mourners included Carl Stokes, a city councilman, and State Sen. Nathaniel McFadden.

Callum wrote for the Review about pioneering black Catholics, and in one of her last columns, in February 2009, connected the inauguration of President Barack Obama to the 1899 Black Catholic Lay Congress, the first of its kind, also in Washington, D.C.

“When the Catholic Congress adjourned, President Grover Cleveland invited the group to the White House,” Callum wrote. “Now, history will record that … in January 2009 a black man was sworn in as president of the United States.”

Her work was championed in the Review by Therese Wilson Favors, former director of black Catholic ministry in the archdiocese.

“Agnes Kane Callum was a walking history book both locally, nationally and worldwide,” Favors said. “When I went to Accra, Ghana in 2004, she sat down with me before the trip and shared interesting places to visit as well as Ghanaian culture.

“Travel with her anywhere in St. Mary’s County, from libraries, archives to churches, whether Catholic or Baptist, and folks would run to her car to escort her into the building and sit at her feet as she shared history, mostly by memory. She followed the spirit of her ancestors, both by blood and by faith.”