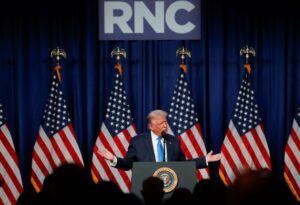 CHARLOTTE, N.C. (CNS) — New York Cardinal Timothy M. Dolan thanked God for living in a country that respects religious freedom and prayed for people battling COVID-19 and those caring for them, the unborn, the elderly, immigrants and refugees during the opening evening of the Republican National Convention.

The cardinal offered the prayer, which was prerecorded, prior to a full evening of speakers Aug. 24.

The cardinal also prayed “that all lives may be protected and respected, in our troubled cities and the police who guard them.”

The minutelong invocation recalled the men and women of the U.S. military serving “in tense world situations” working to “keep the peace.”

Cardinal Dolan also prayed for people facing serious challenges including those whose lives are “threatened by religious persecution throughout the world, or by plague, hunger, drugs, human trafficking or war.”

The prayer concluded with a request that God bless the convention, the presidential nominees of both major political parties and for God’s “wisdom upon an electorate so eager to perform its duty of faithful citizenship.”

Cardinal Dolan was invited to offer the prayer. He and President Donald Trump have spoken publicly of their friendship that has existed over the years.

The Republican convention was scaled back to include a limited number of delegates and party officials to be in line with North Carolina limits on gatherings because of the coronavirus pandemic and is largely an online event.

Trump and Vice President Mike Pence were nominated by delegates nationwide for a second term earlier in the day Aug. 24.

Addressing political conventions is not new for Cardinal Dolan. In 2012, he offered prayers at both the Republican and Democratic national conventions.

Then president of the U.S. Conference of Catholic Bishops, Cardinal Dolan prayed for the unborn, alluded to same-sex marriage and urged a renewed commitment to religious liberty during the GOP convention eight years ago.

A week later, during the Democratic National Convention, he also prayed for the unborn in his closing benediction “that they may be welcomed and protected.”