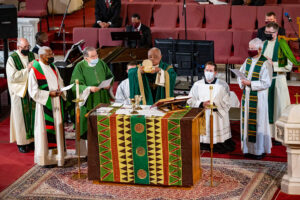 Washington Cardinal Wilton D. Gregory challenged a group of Black Catholic men gathered for a special Nov. 14 liturgy at St. Bernardine in West Baltimore to be “a breath of hope in the lives of so many people – beginning within your own families.”

“You represent the redeeming quality of life for many of your sisters and brothers whose lives might seem to be filled with only signs and expressions of destruction,” the cardinal said in his homily. “You offer hope to people who have grown too accustomed to despair.”

The cardinal noted that American cities so often seem to be places of “death and violence.” Husbands, fathers, grandfathers and neighbors are summoned to become the “guardians of peace and hope for our society,” he said.

Cardinal Gregory pointed out that before African American priests were ordained for service in the United States, Black women religious educated, loved and nurtured young people. In homes where a father may have been absent, “brave” mothers and grandmothers passed on the faith and moral guidance to future generations, he said.

Men have much today to learn from women, he said.

The cardinal urged members of the congregation to be messengers of hope for the society in which they live. He highlighted Pope Francis’ encyclical, “Fratelli Tutti” (“On Fraternity and Social Friendship”) as a guide for Catholics, people of faith and persons of good will on the importance of dialogue, relationship or fraternity with one another.

Cardinal Gregory called the coronavirus pandemic an opportunity to think about a “new different” in terms of “what we value, who we value and (in recognizing) that we are all in this together.”

“The pope provokes us to pursue a shared life and to see the other as brother and sister, both as human beings and all as fellow creatures in our common home,” he said. “He invites us to build a culture of encounter with pride in expressing how we are Catholics, but also how we are enriched by dialogue with all people of good will.”

At the heart of “Fratelli Tutti” is the call to love our neighbor as ourselves, the cardinal said.

“Let us commit ourselves to having meaningful dialogue each day with our neighbors in every encounter we have to bring about the common good intended for us all,” he said.

Thomas Potyraj, organizer of the annual men’s event at St. Bernardine, said he was glad that Cardinal Gregory has been a proponent of bringing people together, especially as the U.S. bishops were planning to meet in Baltimore Nov. 15-18.

“We all have individual voices,” Potyraj said. “Perhaps God likes to hear them in harmony.”

Many parishioners said it was an honor to have the first African American cardinal speak at their parish.

“It was just a blessing to meet him and to be in company with him and to give the Lord our praises,” said Ronald Sherrill Sr., who sang in the choir.

Ivalyn Jones-Actie made a special stole for Cardinal Gregory that symbolized brotherhood and featured Afrocentric fabric that honors Cardinal Gregory as the nation’s first African American cardinal. She presented it to the cardinal during the liturgy.

Baltimore auxiliary Bishop Denis J. Madden, former urban vicar, was among the clergy who attended the Mass. Representatives of the Knights of Peter Claver and its associated Ladies Auxiliary were also present for the celebration, along with members of the Knights of Columbus from Columbia.