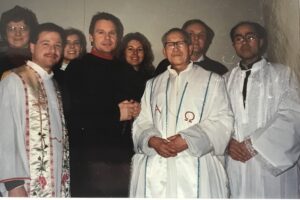 Trinitarian Father Stan De Boe counts his 1994 meeting with Bishop James Su Zhimin as one of the most profound experiences of his life.

The Chinese bishop of Baoding, an outspoken and relentless opponent of the Communist government, had just been released from a hard labor camp after some 20 years as a political prisoner when Father De Boe visited him as part of a small U.S. delegation including New Jersey Congressman Chris Smith.

At the time, Father De Boe’s ministry focused on international human rights and religious freedom, and he was serving as a foreign affairs advisor to Smith. The young priest was no stranger to China, having helped smuggle Bibles into the mainland in 1989 (at the same time the pro-democracy movement broke out), while serving as an intern with a Catholic human rights organization known as the Puebla Institute.

Father De Boe noted that Bishop Su walked with a limp, the product of an injury he sustained in the labor camp after a wheelbarrow loaded with rocks overturned on his leg.

“It was an honor to see the strength and the courage and the faith he had that his mission was still going to continue regardless of what the government had been doing with him,” said Father De Boe, now chaplain to the Little Sisters of the Poor and St. Martin’s Home for the Aged in Catonsville.

Father De Boe, ordained in 1983, remembered that Bishop Su told the American delegation that the Communists would likely re-arrest him for meeting with them. While Father De Boe and others were on the airplane heading back to the United States, that’s exactly what happened. Bishop Su spent some time in prison that same year before being released and then arrested once again in 1997. Bishop Su has not been seen since then except once in 2003. In total, he spent an estimated four decades in prison.

As Vatican and Chinese leaders now negotiate a renewal of a landmark 2018 agreement on the nomination of bishops in China that is set to expire Oct. 22, Father De Boe fears Bishop Su may be dead.

Click below to listen to a radio interview with Father De Boe. Story continues beneath.

Father De Boe noted that Chinese officials named Bishop Francis An Shuxi as the coadjutor bishop for the Diocese of Baoding several years ago and are now requesting that the Vatican recognize him as the ordinary bishop of the diocese – a signal that something happened to Bishop Su.

The Vatican has not recognized the new bishop as the ordinary of the diocese because it wants to know what happened to Bishop Su, Father De Boe said.

The 2018 agreement, which has never been made public, is believed to allow Chinese officials to submit three names for bishop candidates to the Vatican, from which the pope selects one. It has been highly controversial because the nominated bishops include those loyal to the Chinese Catholic Patriotic Association, a government organization that controls the registered, state-approved part of the Catholic Church in China. The unregistered, underground church is not recognized as legal by the Communist government.

Despite its shortcomings, Father De Boe sees the agreement as a step forward in improving relations between China and the Catholic Church.

“I think the Vatican has a foot in the door after having no presence there at all for so many years,” said the 64-year-old Pittsburgh native, adding that he hopes the Vatican will press for answers to what has happened to Bishop Su and others like him.

The Trinitarian recalled that when his delegation visited Bishop Su, he met with Catholics of the underground who urged him to let the world know about how they were persecuted. The priest also met Catholic members of the officially recognized church, many of whom whispered to him that they were secretly loyal to the pope.

Father De Boe recalled concelebrating a Mass with Bishop Su in a barnyard stall in the Chinese countryside on the feast of the Epiphany, which attracted thousands of people from the underground. He said it was inspiring to see the faithful standing in the cold, with faces that showed “absolute trust in God.”

“They knew that God was with them and that this was their mission,” Father De Boe said, “that if they suffered for it, then they knew the church would grow stronger through their suffering.”

Father De Boe said his involvement in international human rights has given him insights into how people around the world suffer for their faith. He was in the former Soviet Union during the 1991 coup, bringing pizzas to people at the front lines of the barricades in Moscow. He has also visited Poland, Ukraine, Lithuania, the Holy Land and Haiti.

“I’ve felt connected with people around the world who don’t have access to the sacraments because of political strife, oppression or a lack of priests,” said Father De Boe, who had been in residence at St. Lawrence Martyr in Hanover while working on international human rights in the 1990s. “It has broadened my view of what the priesthood can be.”

Father De Boe said his human rights ministry fits perfectly with the charism of the Trinitarians, who have a special outreach to those who are imprisoned.

“Our original mission was to ransom captive Christians,” he said. “In our modern way, we still do that by talking about religious persecution and promoting social justice.”

Editor’s note: This story was updated at 8:42 p.m. on Sept. 30 to include the preferred English spelling of Bishop Su’s name and to provide more information about the Chinese Catholic Patriotic Association.