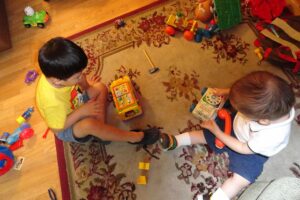 Almost 11 years ago we had just adopted our first child. I was standing in a government building in Guangzhou, China, with a few other adoptive parents as we waited for our ride back to our hotel. And I had a sudden feeling: What if the next child we would adopt in the future were already alive and living in China?

I remember saying that out loud, and our friends with me seemed taken aback. We had all just become parents. Our children weren’t sleeping through the night. The idea of doing it over again seemed a bit crazy. But sometimes when an idea occurs to you, there’s a reason.

I grew up with five siblings, and John grew up with six, and we were hoping to raise siblings. Life doesn’t always work out the way you want it to (I know, I know), but even before that first trip, we were considering the possibility of a second adoption. After about a year of parenthood, we started the process to adopt again.

Two years later when we were matched with our younger son, we realized he had in fact been alive that day—and he wasn’t living far away from where I was standing.

Nine years ago today, we flew home from China with our new baby boy and introduced him to his big brother.

Becoming a family of four was magical and terrifying and incredible and daunting and the answer to many prayers. From the beginning, our boys knew they were brothers. Over time, they have become best friends and occasional rivals and frequent conspirators. It is a joy to watch them grow together.

They’re very different from each other, but they enjoy many of the same activities. Today as we celebrated “Brothers Day,” a Buettner family holiday, they got to set the schedule and choose dinner. You might think it would hard for brothers to agree on such a big decision, but every year they work it out somehow. This year that meant a day of video games and chicken yaki udon for dinner—and brownies for dessert.

Brothers Day is one of my favorite days of the year. I don’t believe God created our sons for each other or for John and me. I believe He intended for each of them to grow up in different families on the other side of the world. But when life happened and those plans changed, I believe He guided them into our family. And I absolutely believe He knew they would be just right for each other—and for us, their forever parents.

Every now and then people ask whether they are real brothers. I look at them and can’t imagine them growing up without each other. They’re definitely real brothers—as real as any siblings are.

Happy Brothers Day to two boys whose separate stories became intertwined nine years ago. God writes the best stories. We are so blessed to be experiencing this one as it unfolds.