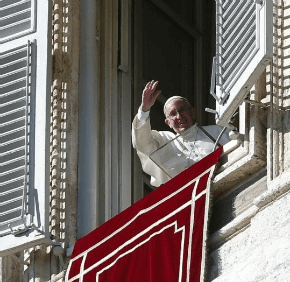 KRAKOW, Poland – After a week filled with faith, fellowship, laughter and even a few yawns, pilgrims from the Archdiocese of Baltimore added pure elation to the list of their emotions upon their first glimpse of Pope Francis, who arrived at World Youth Day July 28.

Their eyes had been filled with wonder and excitement, taking in everything from the Jasna Gora Monastery to Wadowice, but it all was just a prelude to the arrival of the pope, who was greeted by a massive crowd at Blonia Park.

The conditions at the scene were quite unfavorable – steady rain showers lasting all day – but nothing could extinguish the fire in the hearts and souls of these young people. They had walked for miles and stood in line for hours, only to make it to their spots early, and wait for more hours, drenched to the bone.

Despite physical discomfort, they seized the opportunity to meet others from around the world, sample genuine Polish cuisine from the many vendors and food trucks, and reflect and pray.

As the day went on, the park become fuller and the cheers became louder, until the pope arrived and they shook the city of Krakow.

As Pope Francis spoke, the crowd listened, their tears falling even as their smiles grew broader.

“When we saw Pope Francis come into Blonia Park, we – the youth and young adults he has so greatly inspired and encouraged – were able to return the favor with both applause and tears,” said Katie Erskine, a pilgrim from ChristLife Young Adults.

“We felt like Mary, ready to sit at the feet of Jesus and be taught,” added Craig Gould, director of youth and young adult ministry for the Archdiocese of Baltimore, referring to the Gospel account of Christ’s visit to Mary and Martha.

Earlier in the week, the pilgrims had experienced the profound silence of death at Auschwitz; they were now celebrating the overwhelming cacophony of life with Pope Francis.