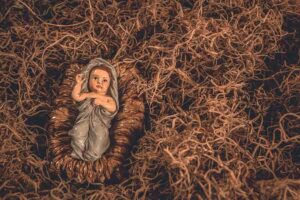 On Dec 17, the day the first “O Antiphon” signaled the intensification of preparations for Christmas, the Church read the genealogy of Jesus from Matthew’s gospel: writing for a predominantly Jewish-Christian audience, the evangelist stresses that the blessings promised to and through Abraham, and the dynastic promises made to King David, are about to be fulfilled in Jesus of Nazareth. Almost three weeks later, the Church will read the second Jesus-genealogy, in Luke 3:23-38. There, on the cusp of the Epiphany and the public manifestations of Jesus as Lord, the historical lens opens farther: Luke also traces Jesus’s ancestry through David and the patriarchs of Israel, but then extends the line back through “…the son of Enos, the son of Seth, the son of Adam, the son of God.”

Why did Luke do that? In order to emphasize to his largely Gentile audience that Jesus is more than the fulfillment of Israel’s desire. He is surely that.  But as Joseph Ratzinger wrote in Jesus of Nazareth: The Infancy Narratives, he is also the one who assumes in himself “the whole history of man, and … gives it a decisive re-orientation toward a new manner of human existence.”  That evolutionary leap will only be revealed at the Resurrection, in the Risen Lord’s appearances to his disciples — which reminds us that Christmas is a great Christian feast because of Easter, the pre-eminent Christian feast.

And if Christmas only makes Christian sense because of Easter, Christmas is only possible because of Mary and her embrace of the mystery of obedient freedom.

On Dec. 20, the Church read in the Liturgy of the Hours excerpts from a homily by St. Bernard of Clairvaux, in which that Cistercian Doctor of the Church reflected on the singular curiosity of God making his plan of salvation dependent on the free choice of a young Jewish woman. Again, Joseph Ratzinger sheds light on this remarkable facet of the Christmas season: “After the error of our first parents, the whole world was shrouded in darkness, under the dominion of death. Now God seeks to enter the world anew. He knocks at Mary’s door. He needs human freedom. The only way he can redeem man, who was created free, is by means of a free ‘yes’ to his will. In creating freedom, [God] made himself in a certain sense dependent upon man. His power is tied to the unenforceable ‘yes’ of a human being.”

And that leads the Pope Emeritus into a Christmastide reflection on the relationship between freedom and obedience. A culture that often confuses freedom with willfulness, with doing things “my way,” will immediately ask, “What has ‘freedom’ to do with ‘obedience’?” To which the Church answers, “The road to true freedom — and, ultimately, to the redemption of humanity — runs through Mary’s response to the angelic announcement: ‘Be it done unto me according to your word’” (Luke 1:38). Benedict XVI then explains the salvific paradox in Luke’s rendering of the Annunciation/Incarnation. It is, he writes, “an utterly humble story, yet one whose very humility gives it … grandeur. It is Mary’s obedience that opens the door to God. God’s word, his Spirit, creates the child in her. He does so through the door of her obedience. In this way Jesus is the new Adam, the new beginning … from the Virgin, who places herself entirely at the disposal of God’s will. So a new creation comes about, which is nevertheless tied to the free ‘yes’ of a human creature, Mary.”

The Christmas story is a lengthy meditation on a counterintuitive but essential truth: true freedom, genuine liberation, comes through freely chosen obedience to God’s purposes. That was true, as we have just seen, for Mary. It was also true for Joseph, who freely agrees to take a pregnant teenager for his wife. It was true of the shepherds, who find their long-awaited savior, in previously unimagined circumstances no less, through obedience to an angelic announcement. It was true of the Magi, who freely travel to parts unknown, in obedience to what they perceive as a divine summons, conveyed by a star. And it was true of Jesus himself, who, at the end of the extended Christmas drama, returns as a youngster with his parents to Nazareth, where he was obedient to them — and through that obedience, “increased in wisdom and stature, and in favor with God and man” (Luke 2:52).

Freely chosen obedience to God’s purposes makes the world anew: from Christmas, to the Paschal Mystery of Christ’s death and resurrection.