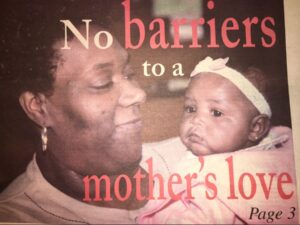 EMMITSBURG — Phyllis Matthews found out she was pregnant only one day before she was scheduled to enter the Women’s Detention Center in Baltimore to serve time for heroin possession. Having a baby in prison was the last thing the 34-year old single mother of five wanted to endure, especially since she knew that her infant would be taken from her immediately after birth.

“I felt that I wanted an aboriton,” said Ms. Matthews. “I didn’t want to be in jail and have him get shipped away.”

Ms. Matthews nearly had her mind made up about ending the life of her unborn child when prison officials told her about a new program called Tamar’s Children.

Launched in March, the program allows qualified non-violent offenders to live in a secured residence at the Walter P. Carter Center in Baltimore where they receive prenatal medical, psychological and substance abuse treatment. The women are taught parenting skills and are encouraged to complete their GEDs, develop job skills and work on self-responsibility.

Mothers are kept together with their newborns so they can intensify the mother-infant bond. There are nine women enrolled in the program, with room for nine more.

“It’s made all the idfference in the world,” said Ms. Matthews, the proud mother of a two-week-old son, Jamal. “They’re teaching me how to be a mom, how to deal with my kids when I have an attitude, when I’m in a moody way. You know, it’s really helping me a lot.”

Ms. Matthews said she has been filled with gratitude to God for giving her Jamal and guiding her into the Tamar’s Children program. That’s one of the reasons she asked if she and the program participants could make a pilgrimage to the National Shrine Grotto of Lourdes in Emmitsburg to pray. Ms. Matthews, a Baptist, had visited the shrine before and knew it to be a holy place.

At the invitation of Mount St. Mary’s College and Seminary, which oversees the grotto, seven Tamar’s Children women visited the shrine May 2. The first two babies born into the program and their mothers were blessed by Father Salvatore R. Lamendola, director of pastoral field education for the seminary, who also provided a blessing for the other expectant mothers and their unborn children.

Tears rolled down the cheeks of several of the women as Father Lamendola asked God to protect their children. Darlene Grossman, mother of four-month-old Jasmine, said all she could do was think about her daughter’s future as the priest prayed over her.

“I just want her to be healthy,” said Ms. Grossman, a 43-year-old single mother was was serving time at the Maryland Correctional Institution in Jessup for drug possession when she was accepted into the Tamar’s Children program.

“Hopefully, she’ll be able to get the opportunities to do the things that I didn’t do,” Ms. Grossman said. “I want her to go to college and be a very important person. And I just hope and pray that I live long enough to get to see her do that.”

Getting Tamar’s Children off the ground was no easy task. While advocates had raised more than $4 million in federal, state, local and private money to fund the program, it languished for two years before women were finally accepted into the initiative.

Judge Brenda P. Murray, chief administrative law judge for the Securities and Exchange Commission, said leaders in the administration of former Gov. Parris N. Glendening had pledged to support the program, but were never able to get it going.

Old misconceptions about women also account for part of the reason for the program’s failure to get going sooner, she said.

“There’s that old stereotype that if a woman commits a crime, she’s not a good mother,” Judge Murray said. “That’s not true. It’s a myth.”

Dr. Joan Gillece, clinical director for the division of special needs populations with the Mental Hygiene Administration and Dr. Andrea Karfgin, project director for Tamar’s Children, were two of the other driving forces promoting the program, along with the women’s legislative caucus. The Maryland Catholic Conference, which represents the state’s Catholic bishops in Annapolis, had also lent its voice in support of the program.

A front-page article and accompanying editorial in the Jan. 30 issue of The Catholic Review was also influential in prodding officials to give the program renewed attention, Judge Murray said.

Dr. Gillece said she was “thrilled” to see the program flourishing, noting that Tamar’s Children benefits from a collaboration of agencies and organizations including the Department of Public Safety and Correctional Services, the Maryland Department of Health and Mental Hygiene, the University of Maryland, the City of Baltimore and the Open Society Institute.

The program goes a long way toward stabilizing families, according to Ainisha Persaud, executive director of Tamar’s Children. Women stay in the Carter Center with their babies for six months in a “safe and secure” setting and then spend six months in the community where they continue to receive services, she said.

Tamar’s Children, named after a rape victim in Genesis, has the potential to become a national model, Ms. Persaud said, with its focus on mother-infant bonding being one of its most distinctive components.

For Ms. Matthews, clean from drugs five months to the day when she visited the Grotto of Lourdes, participating in the program has changed her outlook on life.

“I feel blessed,” she said. “I really do. And this program made a difference. It has a lot to offer.”