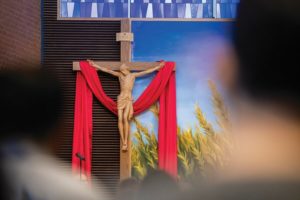 In March, 1933, with the nation in the grip of the Great Depression, President Franklin Delano Roosevelt inspired his fellow citizens with these stirring words, “So let me assert my firm belief that the only thing we have to fear is, fear itself – nameless, unreasoning, unjustified terror, which paralyzes needed efforts to convert retreat into advance.”

Thus did a president, who was himself paralyzed, rally a nation paralyzed by fear.

With the rapid spread of the coronavirus and deepening economic gloom, we may be gripped by a paralyzing fear akin to that of the Great Depression. Fear may immobilize us just when we’re most needed. We’re afraid that we and our loved ones may die of the virus. We worry about shortages. We’re anxious because so much is unknown about COVID-19.

We’re alarmed by the declining economy and wonder what that will mean for our families. There’s the stress of working from home, having children home from school and worrying about aged parents. Add to that the overload of information, opinion and advice from media. Come to think of it, the coronavirus has upended almost every aspect of life, including our ability to worship together and to support one another in our life of faith. Is it any wonder that we’re afraid?

What does our faith teach us about fear? In the Scriptures, we encounter ordinary human fears like our own. The people of Israel were afraid they would die in the desert. The Apostle Peter, filled with fear, denied Jesus three times. St. Paul tells us that inner fears and outward conflicts were part of his ministry. So, let us take heart: the kinds of fear we’re going through afflicted the holiest of people. Yet, in God’s grace they rose above their fears. The people of Israel persevered and entered the Promised Land. St. Peter professed his love for the Risen Lord three times and died a martyr. St. Paul was undaunted by the challenges he faced.

But if they rose above mere human fear, they also experienced another kind of fear, a salutary fear. They feared to offend God by their sins, that is, they feared taking God’s mercy for granted. And in the depth of their hearts was a holy fear, a recognition of God’s surpassing greatness and holiness, and their dependence upon his mercy. It was a spirit of contrition for sin and humility in the face of God’s glory that prompted them to open their hearts widely to God’s providential love.

This is especially true of the Apostles and their companions. Frightened and disheartened after the death of Jesus, they were overtaken by joy as the Risen Lord appeared to them, dined with them, instructed them, and in the power of the Holy Spirit, opened their minds and hearts to everything he taught them. Ever thereafter they were bold and confident in bearing witness to them. It is as if they said, “Fear is useless. What is needed is trust” (cf. Lk 8:50).

So often in Scripture Jesus says to his followers and to us, “Be not afraid.” He’s not asking us to ignore our problems or neglect our loved ones or deny our feelings. He is inviting us to rise above our feelings of fear, to encounter the greatness and glory of God, and in a spirit of humility and contrition to open our hearts to him, perhaps as never before. For, as St. John teaches us, “There is no fear in love, but perfect love casts out fear” (1 Jn 4:18). We are freed of fear when we become convinced, by faith, that “nothing can separate us from the love of God in Christ Jesus our Lord” (Rom 8:39).

Have a blessed Holy Week and a Happy Easter!