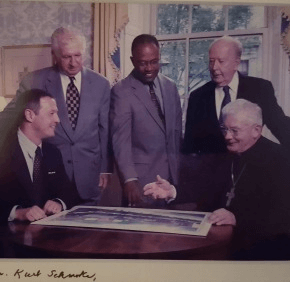 Former Baltimore Mayor Kurt L. Schmoke laughed when he recalled how Cardinal William H. Keeler once tried to reach him at City Hall. The cardinal got through to the mayor’s assistant, who didn’t realize who was at the other end of the phone line.

“Who?” the woman inquired politely.

When the assistant took the message to the mayor, she was stunned to discover the man who called was the spiritual shepherd of approximately half a million Catholics in the Archdiocese of Baltimore. She promptly called back and put him in touch with Schmoke.

“That was just his way of doing things,” said Schmoke, mayor from 1987 to 1999 and current president of the University of Baltimore. “I thought there was a lack of pomp and circumstance surrounding him. He was very approachable by everyone, from big business people to the guy on the street.”

Cardinal Keeler, who died March 23 at age 86, had consulted Schmoke on a wide variety of issues, including Catholic education and support for people in poverty. The two were especially interested in keeping Catholic schools open in the city at a time when public and private schools alike were facing severe economic challenges.

“There had been a lot of literature about the impact of Catholic schools,” Schmoke said, “but I knew from my own experience that they were important institutions to the neighborhoods.”

“That had huge benefits for nurturing children,” Schmoke said. “As far as I was concerned, I wanted to encourage as many of those schools to remain open as possible.”

“We discussed the politics of getting the new shelter developed,” Schmoke said. “Only Cardinal Keeler could have pulled off getting that group of people together with smiles on their faces.”

Schmoke accompanied then-Archbishop Keeler to Rome in 1994 when the cardinal was elevated to the College of Cardinals. The mayor and his wife observed that the cardinal’s interactions with St. John Paul II seemed “more than just an informal, professional relationship,”  Schmoke said.

“That was a source of pride for us,” he recalled. “The entire visit and the ceremony were really uplifting.”

Schmoke, who was mayor when the pope visited Baltimore in 1995, said the key to Cardinal Keeler’s effectiveness as a leader was his ability to listen.

“When he disagreed on policy matters, he did it in such a way that you didn’t feel it was a personal attack,” Schmoke said. “I never walked away from a discussion with him thinking that we couldn’t come back and talk further. He always had the best interests of the community at heart.”

Whenever you were in the cardinal’s presence, the former mayor said, “you could tell that this was a special human being.”