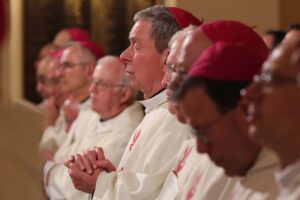 The ongoing discussion of clergy sex abuse has moved to proposals for church reform.

The immediate need is for transparency and accountability. Charges against former Cardinal Theodore E. McCarrick, and those who allegedly covered up his abuses and advanced him to an advisory role at the Vatican, must be investigated and proved or disproved.

The U.S. bishops’ 2002 protocols that nearly eliminated new instances of abuse should apply to bishops, requiring the Holy Father’s cooperation. And these reforms must involve laypeople with appropriate expertise, to break through the wall of clericalism that protects predators.

Other proposals include improved screening and formation for seminarians, and a reformed process for selecting bishops.

These are good ideas. There are also bad ideas, coming from church factions seen as being on the “right” and “left” — though partisan loyalties have no place in the body of Christ.

One bad idea is what Father James Martin calls a “witch hunt” designed to eject men with same-sex attractions from the priesthood. He says some traditionalists favor this.

A man with homosexual tendencies may be drawn to an all-male environment and find it easier to give up married life. But if he strives to live the Gospel and remain chaste despite temptation, he could be a role model of virtue for others. This is the situation Pope Francis seemed to be referring to in his famous comment, “Who am I to judge?” In the same interview, he said there should be no “gay lobby” in the Vatican.

The old proverb is to hate the sin but love the sinner. Actually we must love the sinner and hate sin because it prevents him or her from flourishing as God intended. In working to stop abuse and protect the innocent, we must act from love of all our neighbors, whatever the nature of their temptations, or we are far from the Gospel.

A bad idea from the “left” is to end priestly celibacy or the all-male priesthood. Celibacy is a discipline of many centuries, while male ordination is a constant teaching based on the practice of Jesus himself. But whatever the theological arguments, this proposal is irrelevant to our problem.

As the #MeToo movement illustrates, sexual exploitation has many victims of both genders. Some perpetrators are female, as when schoolteachers (many of them married women) seduce teenage students. The crime of pedophilia is almost exclusively perpetrated by males — but “about 44 percent of convicted pedophiles either are or have been married, and a vast majority of pedophiles have sexual relationships with adults,” according to The Week magazine’s article “Pedophilia: A guide to the disorder.”

A recent column in my local secular newspaper actually said clergy sex abuse would end if priests could marry and have “healthy sexual relationships.” The last thing we need is a message that women can “cure” men’s same-sex activities through marriage.

And it is naive to think we can end the “old boys’ network” of clericalism by making it an “old boys’ and girls’ network.” That only reinforces the idea of a clerical caste that can ignore accountability to the laity.

If we can’t blame sex abuse on the existence of homosexual men, unmarried men or men in general, we may have to settle for arming ourselves against sin and infidelity to the Gospel. Nobody said the real solution would be easy.