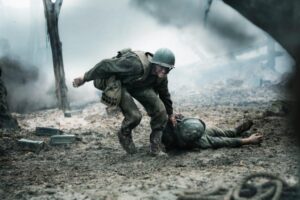 NEW YORK (CNS) — In the 75 years since its conclusion, the Second World War has been the subject of innumerable films of widely varied worth. Some have focused on the ordeal of combat; others have recounted personal stories set against the background of the global conflict.

Following, in alphabetical order, are capsule reviews of 15 of these movies. They have been chosen both for artistic quality and for their educational value in conveying, whether through fact-based plots or at least plausible ones, what the experience of living through the struggle was like for those who did so.

Unless otherwise noted, the films have not been rated by the Motion Picture Association.

With the fall of France in 1940, Great Britain stood alone against the might of the German air force. The movie pays tribute to the smaller number of British fighter pilots who, in the months that followed, downed so many planes that the Luftwaffe was unable to mount its massive raids. Laurence Olivier, Michael Redgrave and Trevor Howard star in this huge and impressive British production directed by Guy Hamilton. Wartime violence. The Catholic News Service classification is A-I — general patronage. The Motion Picture Association rating is G — general audiences. All ages admitted.

Three veterans (sergeant Fredric March, bombardier Dana Andrews and sailor Harold Russell with hooks in place of hands) meet on their way home to resume civilian lives in the same small town where they try to help each other readjust to peacetime. Director William Wyler gives sympathetic treatment to the postwar rehabilitation of returning GIs, portraying in fairly realistic detail their career difficulties as well as personal problems with wives and girlfriends (Myrna Loy, Teresa Wright, Virginia Mayo and Cathy O’Donnell). Mature themes, including a broken marriage. The Catholic News Service classification is A-III — adults.

Epic adventure based on Pierre Boulle’s novel about British POWs in Burma who build a military supply bridge for their Japanese captors while British commandos make their way through the jungle to blow it up. Though the anti-war ending is more hollow than ironic, director David Lean excels in depicting the rigors of prison camp life, the military discipline that sustains the prisoners and, at the story’s center, the battle of wills between the British commander (Alec Guinness) and his Japanese counterpart (Sessue Hayakawa) over who will command the work details. Some wartime violence and harrowing camp punishments. The Catholic News Service classification is A-I — general patronage.

Director Richard Attenborough’s large-scale re-creation of the tragic Allied offensive code-named Market Garden details the fate of the massive paratroop force dropped behind German lines in Holland. The excellent all-star cast includes Dirk Bogarde, Anthony Hopkins, Laurence Olivier, Robert Redford, Ryan O’Neal, Gene Hackman and Elliot Gould. Although the violence is unusually graphic, the movie has value as an historical dramatization that has tried to be faithful to the facts. The Catholic News Service classification is A-III — adults. The Motion Picture Association rating is PG — parental guidance suggested. Some material may not be suitable for children.

Engrossing story of how the German steel mills in the Ruhr valley were flooded by British bombers (led by Richard Todd) using an ingenious bouncing bomb designed by a scientist (Michael Redgrave) to penetrate the area’s fortified dams. Directed by Michael Anderson from R.C. Sheriff’s script, the well-paced narrative details the bomb’s invention, the training of the bomber crews and the dangers of the mission. The Catholic News Service classification is A-I — general patronage.

Thrilling rendition of a fact-based story about an elaborate escape of Allied prisoners from a German POW camp. Steve McQueen is the most ambitious of a crew that includes James Garner, Charles Bronson, James Coburn and Richard Attenborough as they plot a mass escape which becomes an intriguing, highly entertaining suspense gripper. With John Sturges directing, it all builds to a stunning, sobering climax that both tugs at the heart and keeps it racing. The Catholic News Service classification is A-I — general patronage.

The extraordinary heroism of Army medic Desmond T. Doss (Andrew Garfield) during the Battle of Okinawa is vividly realized in this fact-based drama, directed by Mel Gibson. A committed Christian and conscientious objector who refused to bear arms, Doss was nonetheless eager to serve his country, despite the misgivings of his parents (Hugo Weaving and Rachel Griffiths) and his fiancee (Teresa Palmer). Doss overcomes the ridicule and abuse of his fellow recruits in boot camp as well as an effort to discharge him led by the sergeant (Vince Vaughn) heading his platoon and the captain (Sam Worthington) commanding his company. Once in combat, he single-handedly saves the lives of over 75 wounded soldiers while under constant enemy fire. Graphic war violence with much gore, brief rear male nudity, a scene of marital sensuality, considerable crude language. The Catholic News Service classification is L — limited adult audience, films whose problematic content many adults would find troubling. The Motion Picture Association rating is R — restricted. Under 17 requires accompanying parent or adult guardian.

Fine British dramatization about a young boy growing up amid the terror and excitement of the London blitz. Director John Boorman’s fact-based re-creation eloquently expresses a child’s sense of wonder and hopefulness in contrast to the anxiety-ridden, pessimistic and socially conscious lives of the adults around him. Seriocomic treatment of several restrained sexual scenes and some rough language. The Catholic News Service classification is A-III — adults. The Motion Picture Association rating is PG-13 — parents strongly cautioned. Some material may be inappropriate for children under 13.

The Allied invasion of Normandy on June 6, 1944, is re-created on an epic scale in this three-hour dramatization of the operational preparations, behind-the-line activities but mostly the ferocious battle itself, with particular attention to the American landings at Omaha Beach. Directed by Ken Annakin, Andrew Marton and Bernhard Wicki, the result is an absorbing account of D-Day from both sides of the battlefield, with convincing portrayals of men in combat from an international cast headed by John Wayne, Robert Mitchum and Henry Fonda. Wartime violence seen in the context of a righteous cause. The Catholic News Service classification is A-I — general patronage.

George C. Scott’s complex portrayal of Gen. George S. Patton conveys a paradoxical, multifaceted character whose love of the fray and intense will to win were grounded in a deep-seated hatred of war itself. Director Franklin Schaffner’s powerful dramatization is neither a glorification of war nor an anti-war tract but pays homage to a career officer who, unfortunately, could only achieve his destiny in wartime. Violence and profanity within a realistic context. The Catholic News Service classification is A-II — adults and adolescents. The Motion Picture Association rating is PG — parental guidance suggested. Some material may not be suitable for children.

Involving tale aboard a U.S. submarine whose new skipper (Clark Gable) alienates his executive officer (Burt Lancaster) by passing up targets to go after the Japanese destroyer that sank his former sub. Director Robert Wise uses the claustrophobic conditions of submarine duty to heighten the growing tension between the two officers until their differences are resolved in a climactic sea battle. Wartime violence. The Catholic News Service classification is A-I — general patronage.

John Wayne gives a standout performance as a tough Marine sergeant leading his men (Forrest Tucker, John Agar and Richard Jaeckel among them) against the Japanese in one of the bloodiest campaigns in the Pacific. Director Allan Dwan’s movie of men in battle is a fairly realistic portrayal of island warfare and the not-so-easy courage of those who fought it. The Catholic News Service classification is A-II — adults and adolescents.

Riveting war drama set during and immediately after D-Day 1944 when seven soldiers, led by their captain (Tom Hanks), are ordered to go behind German enemy lines to rescue a GI (Matt Damon) whose three brothers had been killed in action the previous week. Director Steven Spielberg brilliantly re-creates the horror and chaos of warfare, never losing sight of the soldiers’ humanity, savagery and patriotism even as they question the justification of their mission. Graphic battlefield violence with gore, some profanity and recurring rough language. The Catholic News Service classification is A-III — adults. The Motion Picture Association rating is R — restricted. Under 17 requires accompanying parent or adult guardian.

Eloquent meditation on the insanity of warfare takes place as American soldiers (notably Sean Penn, Ben Chaplin, Nick Nolte and Jim Caviezel) battle the Japanese forces entrenched on Guadalcanal while reflecting on what brought each to this once-peaceful tropical paradise. Based on the James Jones novel, director Terrence Malick’s lengthy philosophical drama views war as a desecration to all living things — be they human, animal or vegetable. Graphic battlefield violence, fleeting nudity and recurring rough language and profanity. The Catholic News Service classification is A-III — adults. The Motion Picture Association rating is R — restricted. Under 17 requires accompanying parent or adult guardian.

Tense story of a U.S. B-17 bomber group based in England whose commander (Gary Merrill) is relieved for fretting over casualty rates, but the straitlaced officer (Gregory Peck) who succeeds him eventually cracks under the emotional strain of ordering men to risk their lives flying hazardous daylight missions. Director Henry King’s character study of men in war has a strong supporting cast (notably Dean Jagger, Millard Mitchell and Hugh Marlowe), a thoughtful script and stunning wartime footage of air combat. Much psychological tension. The Catholic News Service classification is A-I — general patronage.