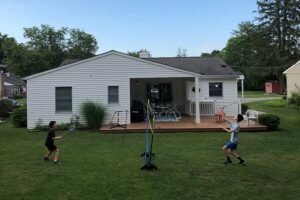 We kicked off summer by ordering a badminton set, and it arrived this week. Our boys are quickly mastering the sport and surpassing me in skill.

I defeated both boys the first time I played each of them, but that is a distant memory from earlier in the week. They are now both better than I am—and quicker on their feet and more competitive.

They have to work a bit longer to surpass John since it turns out he grew up with a badminton net in his backyard. Who knew? You don’t learn things like that until the 16th year of marriage when you’re playing badminton alongside your husband and discover that badminton is his sport.

Apparently Dwight Eisenhower and his wife, Mamie, loved playing bridge—but never against each other. Badminton might be that for John and me. I’d much rather be on his side of the net. 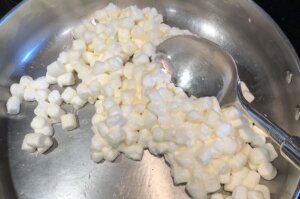 Our rising fifth grader was asking for Rice Krispie Treats the other day, so we decided to make our own. Both boys helped, and it was a very smooth process. I never think to make Rice Krispie Treats, even though I have a child with a deep and abiding passion for marshmallow everything.

Making Rice Krispie Treats always reminds me of this commercial. 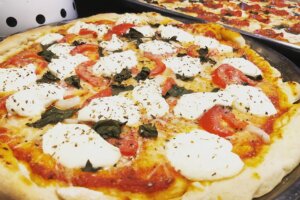 We also made pizza with homemade crust this week, for one of the few dinners John wasn’t making on the grill. I am very quickly getting used to this life where someone else handles the cooking.

The boys have been really helpful in the kitchen lately, too, which has been fun. I’ve always enjoyed cooking with children, but it is much less stressful these days than it was when they were toddlers and preschoolers. 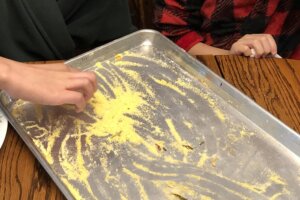 After we ate our homemade pizza, we played family Pictionary by making drawings in the cornmeal on the pizza pans.

Sometimes life is ordering a badminton set you think everyone will enjoy, and sometimes life is playing a spontaneous game of “Guess Which Episode of The Office Inspired This Drawing” in the pizza pans after dinner. 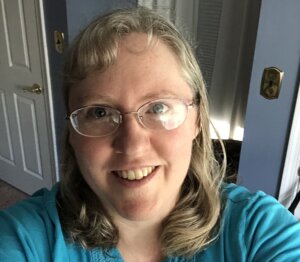 After weeks of talking about cutting my hair, I finally did it. I watched lots of videos on YouTube and felt fairly confident I could pull it off. I was content with how it turned out.

It just has to look good enough for Zoom meetings and walks through the neighborhood. I don’t know when I will feel confident to go for a professional haircut, so I’ll stick with this for now. 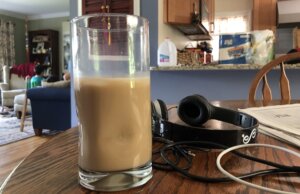 One of the bonuses to working from home is the freshly brewed coffee I make for us every morning. Lately I’ve been taking the leftover coffee and making iced coffee for the afternoon. Since I prefer iced coffee to hot coffee, it has been a real treat.

I’m trying to take at least one picture every day this summer so when we look back on this time I can remember what it was like. And I’m trying to make sure not all the pictures are of our finches. There are lots of those in our first weeks as bird owners. 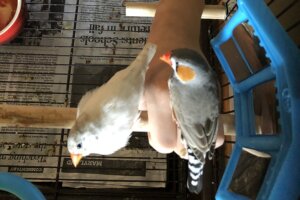 You realize you’ve reached a new point in bird ownership when you find yourself ordering a miniature bowling game for your birds—the very same birds you were arguing against acquiring just a few weeks earlier.

It might be apparent that I’ve fallen hard for these little creatures, but we are all enjoying the birds. The boys have started putting their arms into the cage to see if Ron and Hermione will land on their hands and arms. It’s very sweet to watch.

The pet store had told us finches weren’t all that social, but that same store had also told us that we could only figure out whether they were male or female with a blood test—and that wasn’t correct at all. And so far, I think they are fairly social little pets.

Read more quick takes at Kelly’s blog, This Ain’t the Lyceum, and have a wonderful holiday weekend.