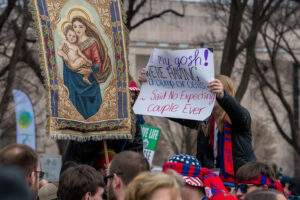 Quite a few more people watched the Golden Globes in January than were expected to participate in the National March for Life Jan. 24 or the Maryland March for Life Feb. 24. That’s a shame, because the folks at the pro-life marches have a more important message.

We know that Hollywood’s glitterati often use their soapbox to promote social and political causes. Golden Globes host Ricky Gervais tried to dissuade them from that, to no avail.

“If you do win an award tonight, don’t use it as a platform to make a political speech,” Gervais said. “You’re in no position to lecture the public about anything. You know nothing about the real world.”

One award winner in particular took a stance antithetical to the pro-life cause.

Actress Michelle Williams picked up a Golden Globe for her role as Gwen Verdon in “Fosse/Verdon,” a series about the personal and professional relationship between choreographer/director Bob Fosse and Verdon, the great Broadway dancer.

Williams first started with a simple statement that the award honored not just the Verdon role, but other choices of education and acting she has made. But she added:

“I’m grateful for the acknowledgment of the choices I’ve made, and I’m also grateful to have lived at a moment in our society where choice exists. Because as women and as girls, things can happen to our bodies that are not our choice,” she said.

“I’ve tried my very best to live a life of my own making,” Williams continued. “And I wouldn’t have been able to do this without employing a woman’s right to choose: to choose when to have my children, and with whom, when I felt supported and able to balance our lives – as all mothers know that the scales must and will tip toward our children.”

If, as a mother, she knows “the scales must and will tip to her children,” why didn’t that include the child who apparently, by her own reference, she lost to abortion?

In the meantime, tens of thousands march each year for life. Countless others are quietly, consistently helping women in unexpected or unplanned pregnancies bring their babies to term.

Some are the people who work at numerous pregnancy counseling centers in Maryland and across the country. One such place is the Center for Pregnancy Concerns – with four local locations – that helps both women and their unborn children. The center’s website notes its purpose is “providing women facing an unplanned pregnancy with a place to explore their options in a non-threatening, comfortable environment. We offer a variety of services, all of which are entirely free.”

To those who argue that pro-lifers care only about unborn babies and don’t help mothers or children after birth, note that the CPC provides clothes (for babies up to 4T, and for expectant moms), bibs, blankets, bottles, formula, diapers, toys and furniture.

My parents were long a part of a group dedicated to the same cause in suburban Chicago. Their home became a clearinghouse for donations to the program. They processed so much used baby clothing that their washing machine wore out. The bedroom that three of my sisters had shared became a warehouse, with 6-foot-tall shelves packed with everything a mother needed for a newborn – onesies, bottles, diapers, clothes and more. Each mother in the program was gifted a contractor-size trash bag full of necessities.

That legacy is maintained by some of my sisters and their own children, who continue to volunteer.

If we want to “tip the scales toward children,” such organizations need your support. Marching in Washington, D.C., or Annapolis are important ways to make your voice heard on life issues, but if you want to make a “powerful, impassioned and inspirational” difference, support your local pro-life pregnancy center.