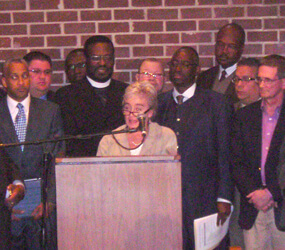 Leaders of a newly-formed pro-marriage coalition came out swinging against efforts to legalize same-sex marriage in Maryland – pledging in a Nov. 30 press conference to rally citizens across the state to defeat legislation that would alter the traditional definition of marriage.

Gathered at First Apostolic Faith Church International in Baltimore, representatives of the interfaith, non-partisan Maryland Marriage Alliance said they will not be intimidated by those who would call their position “bigoted.” They warned that religious liberties could be threatened with the passage of same-sex marriage legislation.

“Politicians in Annapolis with an eye towards appeasing out-of-state interest groups and future runs for potential higher office may think they are helping their career (by passing same-sex marriage),” said the Rev. Derek McCoy, executive director of the Maryland Marriage Alliance, “but they are forgetting that all politics is local.”

Following a passionate debate on the floor of the House of Delegates, a bill to legalize same-sex marriage in Maryland died in the last legislative session after it was recommitted to the House Judiciary Committee March 11.

Gov. Martin J. O’Malley has promised to push for the passage of a similar bill in the 2012 legislative session, agreeing with same-sex marriage activists to sponsor the bill.

McCoy said there is a groundswell of support for traditional marriage, asserting that his group already has representation of 250,000 people.

The majority of Marylanders who support traditional marriage “will not lie down in the face of renewed efforts to redefine this institution to a genderless construct totally at odds with human history and religious teachings,” he said.

Mary Ellen Russell, executive director of the Maryland Catholic Conference, noted that marriage is unique because it is “primarily about connecting men and women to their biological offspring.”

“That is the basis of our support for it,” said Russell, who represents the state’s Catholic bishops in Annapolis. “We do not believe our laws can change the fundamental reality of human existence and the inescapable bond that connects every child to a mother and father.”

Russell noted that the Catholic Church will continue its own advocacy efforts in support of marriage, while also welcoming “the added strength, coordination and respectful voice” of the Maryland Marriage Alliance. She emphasized that support for traditional marriage “cannot – it must not – be construed as lacking in love and acceptance of all persons.”

“The current laws of Maryland,” she said, “reflect an appropriate balance between preserving the special role of traditional marriage in the creation and upbringing of our future generations of children, and the granting of rights to other committed couples.”

Pastor Lanier Twyman Sr., senior pastor of St. Stephen Baptist Church in Temple Hills, said redefining marriage “attacks” First Amendment rights. Catholic Charities in other states have been forced to shut down adoption services, he said, because they will not place children with same-sex couples.

Religious universities are being forced to provide housing to same-sex couples, Twyman added, and churches that refuse to provide their facilities to same-sex commitment ceremonies have had their tax-exempt status challenged.

“God created marriage as a union of one man and one woman as surely as he created the very universe in which we live,” said Minister Darryl Brace of Mount Pleasant Baptist Church in Baltimore. “This definition lies beyond the power of politicians to change.”