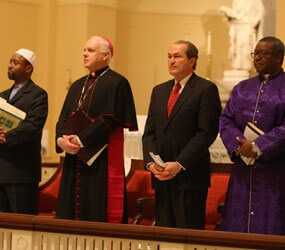 After her brother became Baltimore’s 21st murder victim of 2007, Erricka Bridgeford couldn’t wait for the police to find the person who did it. Bridgeford dreamed of spitting in the murderer’s face. Male relatives thought of even more violent ways of exacting vengeance, she said.

After she saw her brother’s lifeless body, however, something changed.

That wisdom told her that taking the life of the person who killed her brother wouldn’t bring him back. She would have no part in promoting the death penalty. It would bring nothing but one more dead body, she said, and it wouldn’t bring her peace.

Held at the Basilica of the National Shrine of the Assumption of the Blessed Virgin Mary in Baltimore, the prayer service featured Christian, Muslim and Jewish speakers who urged Maryland lawmakers to ban capital punishment.

Kirk Bloodsworth, exonerated by DNA testing after serving on death row for a rape and murder he didn’t commit, also urged an end to the ultimate punishment. More than 50 people attended the 45-minute service.

“We come together this evening, driven by our desire for safer communities,” Archbishop Edwin F. O’Brien said, “but also in our belief that civilized government need not take a life to ensure that safety.”

The archbishop referred to the death penalty as “state-sanctioned murder,” and he recounted his own personal journey from a death-penalty supporter to an abolitionist.

Pope John Paul II’s outspoken opposition to the death penalty influenced the archbishop’s thinking. The pope pointed out that if other bloodless means of punishment are available to protect society from murderous violence, they should be employed. Such means are available in contemporary society, the pope taught.

“The families and loved ones of murder victims have a special claim on our prayers,” Archbishop O’Brien said, “a special need for the caress of our helping hands, a special need for our encouragement to seek solace, understanding and ultimate judgment in a loving God.”

The Rev. Peter Nord, executive presbyter of the Presbytery of Baltimore, said families and friends of murder victims are “victimized again waiting for the death penalty to be imposed.” Because of the appeals process, it takes many years before the punishment is applied.

“We shall overcome evil with good,” he said, “and not with evil.”

Imam Earl El-Amin of the Muslim Community Cultural Center in Baltimore, said the “most outstanding attribute of our creator is mercy.”

“In repentance, there is mercy,” he said, “and who are we to be the final judge of a person’s life?”

Calling it a myth that the death penalty saves taxpayers money, Rabbi Michael Meyerstein of the Baltimore Board of Rabbis noted that the cost of a capital case in Maryland is more than three times greater than non-death penalty cases. In the last two decades, he said, Maryland taxpayers have spent $186 million more on capital murder cases than what would have been otherwise spent.

“(Those) funds could be used to help victims’ families and to establish programs to prevent violence,” he said.

As the Catholic Review went to press March 15, Bishop Denis J. Madden was to testify in Annapolis at a March 15 hearing in the House of Delegate’s Judiciary Committee on a bill to abolish the death penalty. The Maryland Catholic Conference is urging passage of the legislation, House Bill 1075.