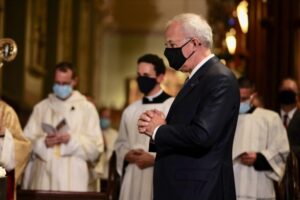 NEW HAVEN, Conn. (CNS) — Every day Knights of Columbus live out the principles of charity, unity and fraternity, and through this daily witness in society, they must redouble their efforts to combat racism, violence and hatred, the top Knight told his confreres.

He made the comments in an address the evening of Aug. 4 during the fraternal organization’s 138th annual convention, held virtually for the first time due to the COVID-19 pandemic.

“Many of our fellow citizens are still treated differently because of the color of their skin,” said Anderson. “Whenever and wherever this happens, it is wrong. And it must be righted.”

Anderson recommitted the Knights to its programs in support of Native Americans and to foster an “honest recounting of their history.” He lamented the recent desecration of churches and statues of saints, especially St. Junipero Serra, whom he called a “heroic and saintly missionary.”

“Where others seek to divide,” said Anderson, “let us promote unity. And where racism festers, let us build fraternity.”

“Living in fraternity is what we do every day,” said Anderson. “It is this commitment to fraternity that gives us the strength to do the great works of charity that our times demand.”

The convention, which had as its theme “Knights of Fraternity,” officially opened with an evening Mass Aug. 4 celebrated by Hartford Archbishop Leonard. P. Blair at historic St. Mary’s Church in New Haven, where Father Michael J. McGivney founded the Knights of Columbus and where his remains are interred.

The archbishop had news of his own to share: Father McGivney’s beatification will take place at the Cathedral of St. Joseph in Hartford Oct. 31.

The Knights expect COVID-19 restrictions to be in place on the date of the beatification, and are making preparations to broadcast the Mass to a worldwide audience so the public is able to join the celebration.

Ahead of the Mass at St. Mary’s Church, Anderson announced the Knights of Columbus Museum in New Haven will be transformed into the Blessed Michael J. McGivney Pilgrimage Center.

On May 27, the Vatican announced that Pope Francis, who met with the board of directors of the Knights of Columbus in February, had signed the decree recognizing a miracle through the intercession of Father McGivney, clearing the way for his beatification.

Once he is beatified, he will be called “Blessed.” In general, confirmation of a second miracle occurring through the intercession of the sainthood candidate is needed for canonization.

In his address, Anderson created Father McGivney, with a “spiritual genius” for bringing men together as brothers who care for others through lives of charity.

Anderson suggested that Father McGivney’s beatification is timely since he understood well the pain of prejudice and discrimination as religious bigotry in the 19th-century targeted Catholics. However, the priest and his contemporaries identified a uniquely American way forward.

“They saw in the freedoms guaranteed by the First Amendment a path offered to them that could be found in no other country,” said Anderson. He cited a similar insight expressed by the Rev. Martin Luther King Jr., who placed hope in the U.S. Constitution and Declaration of Independence because they constitute a “promissory note to … every American.”

Anderson also used his addressed to deliver the Knights’ annual report, which shows that Knights donated more than $187 million and volunteered more than 77 million hours of service valued at more than $2 billion.

The organization responded to the pandemic with the Knights’ locally driven “Leave No Neighbor Behind” program to help neighbors most vulnerable to the illness, as well as blood drives and support for food banks in the U.S. and Canada. Other initiatives included million-dollar lines of credit to dioceses in financial trouble and financial aid to the Vatican’s Bambino Gesu hospital for children in Rome.

Those programs are being carried out in tandem with the Knights’ ongoing activities for the disabled via Special Olympics and programs to help the needy, including Coats for Kids and disaster relief.

Despite the economic downturn due to the virus, Anderson reported insurance sales of $8.4 billion over the past 12 months with agents adopting a virtual business model since the start of the pandemic. With nearly $27 billion in assets under management, he said, the Knights of Columbus is meeting both its financial obligations, and its charitable goals.

In April, the Knights of Columbus was one of six companies to receive the highest ranking in a Standard & Poor’s review of North American life insurance companies. The rankings released April 6 give the Knights an AA+ and in the categories of “outlook,” “business risk profile” and “financial risk profile,” the Knights are considered, respectively “stable,” “very strong” and excellent.

Anderson had a final word about Father McGivney’s beatification and how it is both a cause for joy and a call to higher standards of charity, unity and fraternity.

“We step forward together,” he said, “as Knights of Columbus — ‘Knights of Fraternity’ — to continue our great work.”