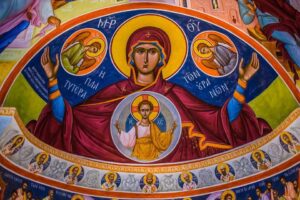 In a card that I received from the School Sisters of Notre Dame there was this quote: “How amazing is it that the same God who created mountains and oceans and galaxies looked at you and thought the world needed one of you too.”

That message is addressed to us all.

In May we celebrate that Mary was specially called by God. We often forget that we, too, are called.

Mary responded to the angel: “Behold I am the handmaid of the Lord.”

As Americans we tend to be doers. As I look back on my life and I can see things that I’ve “done” for God – years and years of weekly radio shows, years of this column, parish retreats and missions, countless hours of counseling. I hope all of those things have mattered to God. And yet I know it is not just what I do for God, but what God can do through me without me even knowing it. Let me tell a true story.

Years ago, shortly after I was ordained, I was stopped at a traffic light in Pikesville. As I sat at the red light, I noticed a car coming toward me from behind. I thought to myself: “That car isn’t going to stop!” The car plowed right into the back of my car.

I wasn’t hurt, and I got out of my car to check on the driver. It was obvious he was intoxicated.

The police arrived, and things were settled. I was able to drive away. I got another car and thought no more about the accident.

Over 20 years later I was giving a retreat at St. Joseph’s in the Hills in Malvern, Pa. After one of the conferences, a man approached me and asked if I remembered being in an accident years ago in Pikesville. I responded, “Yes.”

The man then said to me, “You don’t know this, but you saved that man’s life that afternoon.”

I was confused and I asked him to tell me more. He said, “That man was on his way to Druid Hill Cemetery. He was going to visit his mother’s grave. His mother had just died, and he planned to go to her grave, take an overdose of drugs and die on his mother’s grave.”

The man added, “Because of that accident, he didn’t kill himself. Today he is alive and sober. I know all this because I’m in the same recovery group with him.”

As a young boy, my hero was always the Lone Ranger. (I used to listen to the show on the radio! How old am I?) I loved the fact that he always did the good deed, saved someone, arrested the bad guy and rode away without anyone even knowing who he was! “Who was that masked man?” someone would ask at the end of the show. And invariably someone say: “That was the Lone Ranger!”

But the Lone Ranger at least knew he had done a good deed. In this incident in Pikesville, I had no idea God was working a miracle through me.

And maybe that’s the better awareness. “Here I am, Lord, I come to do your will.” Our job is not just to do good things for God, but to allow God to do good things through us. That’s what Mary models. And that’s why all generations have honored her at Christ’s first disciple. She heard the word of God and kept it: “The Lord has done great things through me, and holy is his name.”