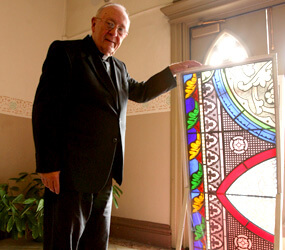 On his first day as pastor of the Shrine of St. Alphonsus in Baltimore, Monsignor Arthur Bastress walked down the historic church’s long aisles and knew immediately that his new assignment was going to be something special.

The sense of history was palpable as the then 72-year-old pastor walked on the same floors once trod by St. John Neumann and Blessed Francis X. Seelos – Redemptorist former pastors who served the parish when it ministered to Baltimore’s German population.

“I’ve been very committed to every job I’ve had as a priest,” Monsignor Bastress remembered, “but I just knew that there was something different about the place.”

In the last 11 years, Monsignor Bastress has led a revitalization effort at St. Alphonsus that restored the church’s steeple and roof, repaired the steps and improved the heating system. The pastor proudly noted that with the support of generous contributors, the parish “doesn’t owe a penny” on the more than $1.5 million in improvements.

The church is now raising $900,000 for the restoration of the 32 stained glass windows that were installed 164 years ago. Half the windows are expected to be completed by Christmas, he said.

“It makes him an honorary Redemptorist,” Father Woods said. “It’s kind of like a knighthood.”

Father Woods noted that only one or two people a year are nominated for the honor. Only the Redemptorist superior general in Rome can confirm a nomination, he said.

Sitting in his office a few days before receiving the honor, Monsignor Bastress said he is committed to preserving the historic legacy of faith that has been passed from generation to generation at St. Alphonsus.

“I think we’ve lost a sense of the past and the value of the faith that has been given to us,” Monsignor Bastress said. “The shrine speaks to us about our heritage. It’s something we need to hold on to.”

The priest’s face lit up when he observed that if Blessed Seelos is canonized, it would make St. Alphonsus the only parish in the world to claim two former pastors as saints.

“Man!” he exclaimed. “That gives me goose bumps. Can you imagine?”