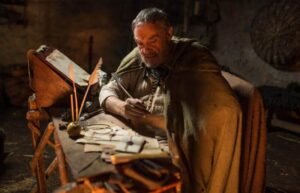 NEW YORK (CNS) — The reasons the church continues to honor the Apostle of Ireland more than 1,500 years after his death shine forth in the film “I Am Patrick” (CBN), a docudrama screening in theaters for two nights only, March 17 — St. Patrick’s Day — and March 18.

Written and directed by Jarrod Anderson, the profile — subtitled “The Patron Saint of Ireland” — seeks to debunk many of the myths and legends that have grown up around its subject over the centuries. The goal is to capture who Patrick really was as a man and a follower of Christ.

John Rhys-Davies (Gimli in the “Lord of the Rings” trilogy) plays Patrick in old age. With his distinctive voice and stately bearing, he brings the patriarch to life as he reflects on his past and writes his “Confession,” laying out the facts about his work to refute the detractors who have arisen during his evangelization of Ireland.

Anderson has brought together an impressive array of people to lay out what is known about Patrick. Those interviewed include historians Charles Doherty and Elva Johnson as well as authors Thomas O’Loughlin and Father Billy Swan. They weave a narrative that reveals Patrick for the amazing missionary he was.

The exact dates of Patrick’s life are not known but the historical consensus identifies him as a fifth-century figure. Probably born in Roman Empire-controlled Britain, he was the son of a deacon, though his father’s position was more that of a civil servant than a church leader.

Because Patrick (played as a teenager by Robert McCormack) was also expected to enter the civil service, he was taught to read and write. But all the youth’s plans for the future came to an abrupt end when he was kidnapped by Irish raiders and taken to their homeland as a slave.

In his “Confession,” Patrick describes his descent into slavery as a wake-up call from God. His duties as a shepherd meant that he was in danger from other raiders, but his solitude gave him ample time to reflect on God’s goodness. As he came to think of God as a father he could trust, he began to pray and developed a personal relationship with him.

One night, Patrick heard a voice urging him to go home, “for a ship was prepared.” Traveling 200 miles through lands where he was constantly exposed to the danger of being recaptured, he reached the coast and found safe passage back to Britain. During all that time, he was not afraid “because he had come to know God.”

Unsurprisingly, his family was thrilled to see him. But the Patrick who returned to them was very different from the Patrick who had left six years previously. He followed his desire to become a cleric, first, serving as an apprentice to the local bishop, and then being sent to Gaul (modern-day France) to study theology.

In explaining Patrick’s journey to ordination, the film falters a bit, failing to clarify the process by which he would have become a priest, and then a bishop in late Roman times. Simply saying that Patrick “worked his way up the ranks to become a bishop,” seems vague and inadequate.

The film then fast forwards to the middle of Patrick’s life. After a decade in Britain, Bishop Patrick (now played by Sean T. O’Meallaigh), acts on a call from God to return to Ireland as a missionary. Of course, everyone thinks this is a crazy idea because, legally, he would still be considered a fugitive slave. But Patrick insists that it’s God’s will that he go. And go he does.

It’s no spoiler to say that Patrick’s evangelizing mission was a great success. And the film does a splendid job of detailing just how much of a change it was for the Irish pagans to become Christian.

Some back in Britain, however, were uncomfortable with Patrick’s efforts and with the way the church was developing in Ireland. Even after decades of work, Patrick still had his critics. It was for them that he wrote his “Confession,” saying that his only motivation in all the preceding years of labor had been “to bring people to Christ.”

The live-action and documentary elements blend well, keeping the pace moving along as the story unfolds with the help of Moe Dunford’s narration. The actors who portray Patrick at different stages of his life successfully capture the excitement, determination and zeal Patrick consistently displayed.

Anderson gives moviegoers an opportunity to view this popular saint as the lover of Christ and proclaimer of the Gospel that he was. His screen biography thus makes especially apt fare for Lent. Perhaps in witnessing the radical way Patrick responded so fully to God’s calling, we might take a moment to reflect on how we live out our own vocations.

The film contains brief stylized violence. The Catholic News Service classification is A-II — adults and adolescents. Not rated by the Motion Picture Association.