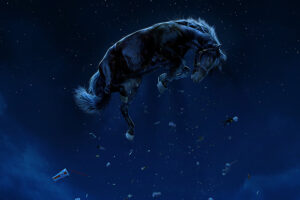 NEW YORK (CNS) — After a grim quotation from the prophet Nahum, the opening scene of “Nope” (Universal), writer-director Jordon Peele’s menacing sci-fi horror film, sets the tone for what follows.

On the set of a 1990s sitcom about a family that has adopted a chimpanzee, the primate goes violently rogue with bloodily fatal real-life results.

The incident is at once eerie, queasy and pointed, turning the fake humor and canned laughter of the popular but witless show into a backdrop for slaughter. The conceit hits home — yet it’s as unsettling as it is telling and marks Peele’s movie as an inappropriate choice for casual viewers of any age.

Another of Peele’s provocative jokes lies in the first name he gives his male protagonist: O.J. Haywood (Daniel Kaluuya). Together with his sister, Emerald (Keke Palmer), O.J. is trying to revive the flagging Hollywood animal wrangling business the siblings inherited from their formidable father, Otis (Keith David).

Otis’ demise was a bizarre one since he was apparently killed by debris inadvertently dropped from a passing airplane. O.J. remains unconvinced by this speculative explanation. And, in fact, Dad’s death proves the prelude to the core of the plot: O.J. and Emerald’s uneasy interaction with a spacecraft manned by unseen but distinctly hostile aliens.

Although suitably frightened by the presence of the extraterrestrials, the duo also sees documenting their existence as a path to fame and fortune. To achieve this, they enlist the help of Angel Torres (Brandon Perea), an electronics store clerk with a knowledge of surveillance cameras and Antlers Holst (Michael Wincott), a hard-bitten but cross-dressing cinematographer.

Peele turns the siblings’ quest to take advantage of the dangerous situation in which they find themselves into a parable about the yearning for a fresh start, as well as the grasping greed, that lay beneath the apparently heroic surface of the Old West as portrayed in innumerable cowboy-themed movies and TV shows. It’s a simultaneous commentary on both the reality of the frontier and its media-shaped legacy.

Yet, though ambitious and striking, Peele’s narrative ultimately feels unfocused. In part, that’s because O.J. and Emerald’s materialistic aims are in tension, not only with their fear of the visitors, but with another of the script’s underlying themes: the need for courageous defiance in the face of evil.

Thus, despite strong performances by both Kaluuya and Palmer, their wavering characters come across as muddled rather than balanced.

Peele returns to the subplot kicked off by the initial sequence via the tangential presence in O.J. and Emerald’s saga of Ricky “Jupe” Park (Steven Yeun). Now the owner of a local theme park, Ricky, as a child actor, was a witness to the enraged chimp’s murderous rampage. His experience has since become a macabre legend — one from which, Peele shows us, he’s quite prepared to profit.

The inclusion of such grimly ironic material makes “Nope” challenging fare even for grown-ups. So, too, does the dialogue’s incessant vulgarity.

The film contains numerous gruesome and gory images, drug use, a transvestite character, about a half-dozen profanities, a couple of milder oaths and constant rough and crude language. The Catholic News Service classification is L — limited adult audience, films whose problematic content many adults would find troubling. The Motion Picture Association rating is R — restricted. Under 17 requires accompanying parent or adult guardian.