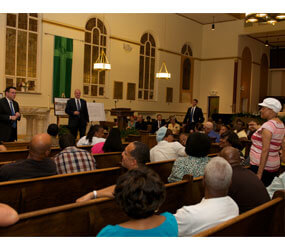 The Howard Park Community’s collective voice has been heard, and their prayers are on the verge of being answered.

Residents of the northwest Baltimore community anxiously crowded New All Saints Church in Liberty Heights Aug. 19 to meet with representatives of Klein’s ShopRite of Maryland and UpLift Solutions, who announced that a state-of-the-art supermarket would be coming to their neighborhood.

The ShopRite of Liberty Heights will be one of the supermarkets developed by Klein’s with the assistance of UpLift Solutions, a non-profit created to help supermarkets open in locations that lack access to healthy and affordable foods.

Residents had been without a supermarket since a nearby Super Pride grocery closed its doors more than ten years ago. Father Donald Sterling, pastor of New All Saints, recalls efforts to fill that void being mobilized as far back as the summer of 2003.

“This is extremely important for the people in this community,” Father Sterling said. “It’s been 13 years since there’s been a supermarket in this area. This is critical as a food market.”

Father Sterling believes that the supermarket can be the catalyst for change in the community, specifically with the availability of healthier foods and fresh fruit and vegetables.

“People here can now eat well,” Father Sterling said. “Let’s be honest, many of the other groceries found in urban areas don’t exactly offer us the best food. This supermarket coming here opens up possibilities for good health, especially with the nation dealing with obesity.”

The supermarket will cover 68,000 square feet and have 212 parking spots. A variety of food, including organic, natural, and ethnic foods, will be sold at the grocery. The ShopRite will also offer an in-store health clinic and a pharmacy.

Marshall Klein, vice president and chief operating officer of Klein’s ShopRite of Maryland, said his family was convinced to bring a grocery to the community after noticing what he referred to as a “supermarket desert.”

“All over the state, we looked around and people were building stores in areas that already had supermarkets, places that were overserved,” Klein said. “We wanted to go somewhere that was underserved. This is where people need service.”

Father Sterling said he is looking forward to the stability and jobs the business will bring to the community.

According to Klein, groundbreaking is set for February or March 2012, with opening tentatively scheduled for early 2013. He said that the project is currently waiting for the city to give approval to raze buildings so construction can begin.

While a majority of attendees were encouraged by the store’s impending arrival, a few were skeptical, having been told in prior years that a supermarket was coming only for plans to fall through.

“It’s a lot of talk right now,” said resident Jesola Jones. “I honestly feel that I don’t know if it’s coming or not. I want to feel that it’s going to come though.”

Jones granted that the process had never gotten this far along before.

Klein, meanwhile, was encouraged by the feedback he got during the presentation.

“I couldn’t have imagined the positive energy we got here from the community,” Klein said. “They gave us such a positive reception.”