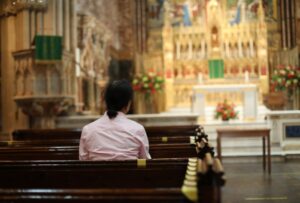 MANCHESTER, England (CNS) — Only a small minority of British Catholics said they would not return to worship in church when the coronavirus pandemic is fully over, according to a new survey.

Just 4% of people interviewed in the study, conducted between May 19 and July 26, said they would abandon going to church when restrictions are finally lifted.

The findings of the poll of 2,500 people by Catholic Voices, a group set up in the U.K. in 2010 to improve communications between the church and the media, contradict the predictions of some Catholics that the COVID-19 crisis would irrevocably accelerate the decline of collective worship among the faithful.

Brenden Thompson, CEO of Catholic Voices, said he was “pleasantly surprised by many of the findings.”

“Catholics miss their parishes and church buildings and seem eager to return, not just content with ‘virtual church,'” he said in a statement.

“Many, it seems, by and large, have backed the bishops, been grateful for the efforts of clergy to livestream, and many have even felt at times closer to God and been more prayerful than usual,” he said.

“That said, the challenges ahead are real, so if we want to capitalize on this goodwill, we need to start thinking seriously about the conversations that need to happen as more and more begin returning to parishes,” he added.

In early September, Cardinal Jean-Claude Hollerich, president of the Commission of the Bishops’ Conferences of the European Union, said many Catholics in Europe would not return to Mass or parish activities once the COVID-19 restrictions are lifted, which demonstrates the urgency of a new evangelization based on Catholics actually living their faith.

The British study revealed that 93% of those interviewed worshipped by watching Mass online during lockdown via streams provided largely by dioceses and parish churches, and that 66% appreciated the virtual services.

But 61% of those interviewed said they wished to revert to regular Mass attendance when the churches fully reopened, with 35% saying they would worship online only occasionally at that point — if the service remained available.

“It seems that virtual worship during the lockdown has been generally well received,” said the study, published Sept. 9.

“While it may remain something that some people might dip into in the future, few would stop attending church altogether,” it said.

In a statement, Catholic Voices said the study, called “Coronavirus, Church & You,” was intended to explore the experience of the lockdown of both clergy and laity.

A total of 53% said they believe the Catholic Church had responded well to the crisis, compared to just 22% who offered the same opinion for the performance of the government.

Nearly two-thirds of Catholics had some contact with clergy during lockdown, the survey found, while exactly half of those interviewed said the crisis made them feel closer to God. More than 50% said the lockdown made them more prayerful.