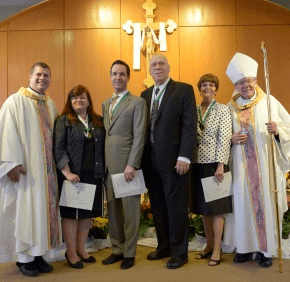 The 200-plus page coffee table book St. Athanasius Parish in Curtis Bay commissioned for its centennial in 1991 includes several pages featuring the Mass that began that celebration. Multiple photos identify nine elders seated in places of honor in the first pew.

Not only was that tradition revived April 3, when St. Athanasius began its 125th anniversary, the liturgy’s opening procession included an 84-year-old cross-bearer.

Unlike many in the church that includes one of the best panoramas in the Archdiocese of Baltimore, Mary Koppleman was not born and raised along the mapmaker’s line that divides Anne Arundel County and Baltimore City.

Baptized in East Baltimore and married in South Baltimore, Koppleman found a church home in Curtis Bay. The widow attends daily Mass in its intimate chapel, takes communion to the sick, volunteers at bingo and generally reciprocates the embrace she found there.

“I just love our church,” Koppleman said. “Anybody who comes here gets a hug.”

With that, she opened her arms to Millard Herold III, one of four parishioners who received archdiocesan Medals of Honor at the April 3 Mass.

A financial planner who was raised in Riviera Beach and did his undergraduate work at Loyola University Maryland, Herold lives in Annapolis. There are a half dozen Catholic parishes on his commute to St. Athanasius, where he lectors and lends his financial expertise; why does he go that distance?

“I used to drive here all the way from Kent Island,” Herold said. “Young, old, all the ethnicities and diversity, you feel the love and devotion of the people. You’re stopped by the building’s outside appearance. ‘Is it a gymnasium?’ But then you come inside and feel that community. To me, that’s what church is all about.”

He joined the parish at the invitation of Father Robert A. DiMattei Jr., its pastor since 2000, who had previously served at St. Jane Frances de Chantal, where Herold had lectored.

Under Father DiMattei, the parish has renovated and restored the aforementioned chapel, adding to the foundation laid by his predecessors.

Working back in time, some of those pastors included:

·        Father Timothy B. Klunk, who designed the stained glass windows that were funded by the archdiocesan Heritage of Hope campaign.

·        The recently deceased Father Brendan Carr, who led the parish from 1983 to 1994 and rolled up his sleeves alongside his volunteers.

Born in Russia to a noble family, Father Sandalgi could speak, read and write in 13 languages, according to that centennial history. His linguistic range came in handy in a blue-collar community that included a Polish school and a substantial number of Czech immigrants, one where the St. Athanasius benefactors memorialized on its stained glass windows include family names such as Kaszubinski and Zientek.

Pins honoring the 125th anniversary of Saint Athanasius Church in Curtis Bay were given to parishioners as they entered Mass on April 3 beginning a year of celebration for the parish. (Kevin J. Parks/CR Staff)

Then and now, the parish is known for celebrations that include bountiful, homemade food. It’s a place where bakers work from scratch and scoff at the notion of a “box” cake. With that banquet available, how does Father DiMattei remain fit?

Since 2010, he has also been the pastor of St. Rose of Lima in Brooklyn. It numbers 310 families; St. Athanasius counts 690. The twin parishes share not only a pastor, but a bulletin and a staff, which includes Deacon Michael Dodge and Mary Beth Barnes, pastoral associate and director of religious education.

Father DiMattei and Deacon Dodge were joined at the April 3 Mass by Bishop Denis J. Madden, vicar of the Neumann Vicariate, and Monsignor James W. Hannon, interim vicar of the Seton Vicariate.

Bishop Madden is no stranger to St. Athanasius, as he’s been celebrating 4 p.m. Christmas Eve Mass there for years. On Divine Mercy Sunday, his homily emphasized the spirit of mercy he has found in the parish.

“Parishioners are recognized as devoted and generous, who give out of love for their parish, not out of what excess funds they might have,” Bishop Madden said. “By serving God, this community and each other, this parish family has come to realize what Jesus meant when he said I no longer call you servants but friends.”

The April 3 Mass included the distribution of custom lapel pins to all and archdiocesan Medals of Honor for Herold; Frank Peckukonis, a longtime parish leader and the chairman of its first pastoral council; Peggy Stano, a past chairwoman of the parish council who was called out of the choir loft; and Teresa Stevens, active in various youth ministries.

“It was hard to choose just four,” Father DiMattei said to his congregation. “Remember, they represent you.”

Quotable: “Quite poor, they were never able to build and support a school.” – From its 1991 centennial book.

Cancer no match for friendship, faith