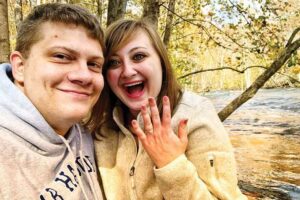 If there is one thing for which 2018 will be remembered, it will be for the frequent deluges that flooded parts of Maryland. On one of the few clear weekends in the fall, the first in November, when leaves finally reached a gorgeous peak, my boyfriend and I jumped at the chance to go for a hike.

As we ventured through the McKeldin Area of Patapsco Valley State Park, we could hear the river roaring. Just after we hit into the Patapsco and began following it along the trail, he pointed out a large rock protruding into the river, and suggested we take a rest (which was strange after less than a mile of hiking).

Settling myself on top of the rock, I was mesmerized by the gushing and overflowing river, the water just barely missing my Bean Boots stretched out in front of me. He unzipped his backpack and then tapped me on the shoulder; my heart began to race and my stomach turned, realizing what was about to happen (there had been some signs that were hard to ignore).

I ignored his tap and kept looking at the river, unable to tear my eyes from the rapids, because what was behind me was much more intimidating.

He tapped again. Still looking at the river, I said, “Yes?” He told me he loved me. I returned the sentiment, but never took my eyes from the river.

For a third time, he tapped my shoulder – this time a little harder – and jokingly cleared his throat. I tore away from the view and found him behind me, down on one knee with a small box in his hand.

He asked me outright: “Will you marry me?”

He was beaming – a far cry from my first impression of him eight years ago, at the beginning of our junior year at Delone Catholic High School in McSherrystown, Pa.

He was the new boy who had transferred into our class. Noticing that we shared a couple of classes, I (of course) tried to be nice and friendly, but was met with a grumpy and gruff demeanor. He was not going to be a friend, so I thought, but God had other plans.

Later that year, we both attended our school’s Kairos retreat weekend at Bellarmine Retreat Center in Waynesboro, Pa., where we all bonded and grew in faith.

The following spring, his mom met mine. His was teaching the baptism class at St. Bartholomew in Manchester, and mine had tagged along with my sister as she prepared for her baby boy’s first sacrament. My mom asked me if I knew him, and at some point after that, we became friends.

It wasn’t until after college that we realized our values, ideals, goals and dreams aligned seemingly perfectly.

We had both gone to a high school 45 minutes away from our homes, which sit only 10 miles apart. We had been so close, but God made it so we would develop this relationship at the perfect time.

Catholic Schools Week always serves as a time to reflect upon the many gifts that those institutions give us: a solid education, a deeper faith and lasting friendships. Not everyone will meet a future spouse while in Catholic school, but truthfully, my fiancé was by far my favorite gift.