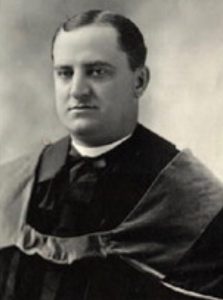 In the face of the “New Woman” movement that encouraged women of the late 19th century to break the bonds of domesticity and claim greater independence in society, one of the bright stars of American Catholicism made an appearance in Baltimore to preach the merits of traditional marriage.

Then-Father Frederick Zadok Rooker, who would later take on the daunting role of bishop of the Diocese of Jaro, Philippines, during the American occupation of that archipelago nation, spoke at a vespers service in 1896 at what is now the Basilica of the National Shrine of the Assumption of the Blessed Virgin Mary in Baltimore.

In his talk, covered by The Catholic Mirror (predecessor to the Catholic Review), Father Rooker called marriage a voluntary contract between a man and a woman who live together for a common purpose.

Unless a man and woman are willing to give up their individuality for one another in marriage, Father Rooker said, they have no right to marry.

“This is love – pure, complete, self-sacrificing love,” said Father Rooker, who was then serving as secretary to Cardinal Francesco Satolli, the pope’s apostolic delegate to the United States.

Both individuals must “put up with each other” and with “peculiarities,” he explained, according to a report in the Feb. 1, 1896 issue of the Mirror.

Such an approach promotes tranquility, he said, and shows children how their mother and father are considerate of each other.

“In many cases, men and women are too much occupied with matters outside of their families to give the proper care to their children,” the priest observed.

Taking a swipe at the “New Woman,” Father Rooker said the name meant well, “but it is simply an effort to be mannish.” He warned that women who seek to be like men will also emulate their vices.

“When she does that, she becomes worse than the men who indulge in the same vices,” he insisted.

“Let a woman be a woman and a man be a man in every sense of the terms,” he said. “Then both are fit to enter the state of matrimony, fit to be the beginning, the basis of families.”