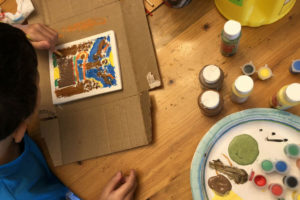 Over the past few weeks, I have been going through some boxes of photos and mementoes. The idea is that I will organize them and maybe even discard some things I don’t need.But if you were to check in with my extended family, they would probably say that the main purpose seems to be for me to text them pictures of photos they have never seen or barely remember. 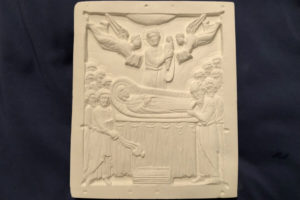 Still, whatever the purpose of this archaeological dig, the discoveries have been quite entertaining.

And sometimes I come across something I didn’t even know I owned.

That’s the case with this find. I opened a small, flat Christmas box and unwrapped a single sheet of tissue paper to find this small relief of the Dormition of Mary.

If you didn’t recognize it immediately, that’s understandable. I didn’t either. I photographed it and sent it to my sister Treasa, who majored in art history in college. She’s my go-to for art history questions, and she explained it to me.

The Dormition of the Blessed Mother shows Jesus’ mother falling asleep on earth and being carried to Heaven at the same time. Mary being taken body and soul into Heaven is what we celebrate on the Feast of the Assumption on Aug. 15.

So when our younger son asked if he could paint it for me, I figured this was the week to do it. Why not? 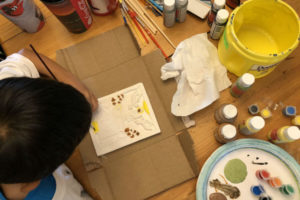 And, although I liked how it looked without paint, I was also trying to get some writing done, so setting him up with paint at the dining room table seemed like a perfect idea.

This is where we are, you see, with an 8-year-old and a 10-year-old. When they were 2 and 4, I would have needed to put a disposable tablecloth on the table, cover the floor in newspapers, and let them use one paint at a time.

This time I opened up a dozen or so paints, handed him a cup of water, some brushes, a roll of paper towels, and told him to have fun.

A few minutes later when he said, “I dropped some paint on the carpet,” his brother said, “That’s good because we want to get rid of this carpet anyway.” 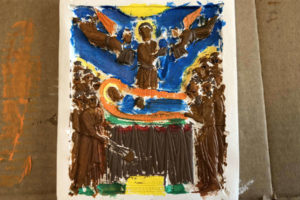 That either shows how calm we are about painting these days or it tells you how much that particular carpet has been through—which is quite a bit.

He painted for a while, went to play while some of it dried, and then came back and finished his project.

When we went to Mass together for the Holy Day, the priest explained that the Assumption was also called the “Dormition of Mary” and my older son gave me a knowing look.

So now we have a hand-painted Dormition of Mary and two children who know a little more about the Feast of the Assumption. We’ll call that our victory for the week.