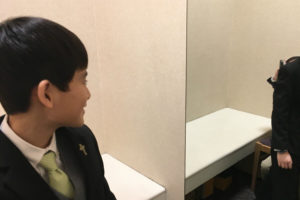 We haven’t had professional photos taken of the boys in almost four years, so I scheduled a shoot last week, got them all dressed up, went to the mall, and they posed for the camera. I’m thrilled with the photos, and they each got $5 to spend on Pokemon cards.

We’re having a few people over for dinner tonight. I didn’t add up exactly how many until yesterday, and I realized that we’re having seven adults and 10 children. I’m not sure we’ll have party favors, but I bet we’ll be playing musical chairs!

Actually, we’ll probably feed the children first and then five minutes later when they’re bored, the grownups will eat. Or the kids can have a picnic in the living room. 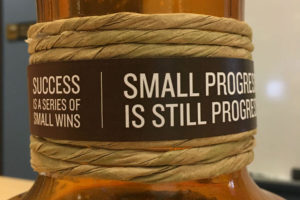 Speaking of victories, I dropped enough hints around the office that I was hoping for a label for our small victory jar, and one of my graphic designer colleagues made a beautiful one for it. I love it.

One of the best parts of my job is working with creative people.

Another great part is I get to be the moderator for the Irish Step Dance Club, and this week I carved out time to go watch them practice and write a story. 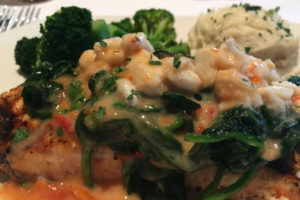 We have cousins in town! My brother Ricky drove to town with his four children, and our boys are having a blast. Yesterday Ricky picked them up after school and took them to my parents’ house to play. Then my mother called and offered to feed our boys so I could take John out to dinner. I emailed John to ask, and I don’t believe he has never replied so quickly.

We were giddy. We even had a gift card we hadn’t used yet, so we went out and ate a lovely meal in a restaurant we probably wouldn’t visit with our children—excellent restaurant diners that they are. I sort of missed that no one at our table started belching “The Star Spangled Banner.” Sort of. But mostly I really enjoyed having some adult conversation and delicious food before we headed out to pick up our sons.

How is Lent going for you? I hit this moment every Lent where I feel I’m failing at Lent, and this year I’ve hit it multiple times. But it’s still Lent, and I still have time to grow. I’m trying to stay positive.

We continue to pull a name out of our prayer basket every day so we can pray for that person or family every day. Yesterday we pulled out my other brother’s family and prayed for them. I learned today that their basement flooded yesterday. Last year the day we prayed for them my nephew got hit in the face with a ball. I can’t decide whether our prayers are making their lives better than they might be without the prayers, or whether we should leave them out of the basket next year. 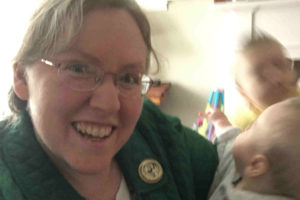 After I wrote about visiting my sister Treasa and her children for lunch earlier this week, I realized I had a perfectly wonderful bloggable photo of me with her twin boys.

I don’t know how I overlooked it in the excitement that evening.

Maybe it’s because I look a bit crazed as I laugh at the baby who’s photobombing my selfie with his brother.

Nonetheless, I wouldn’t want you to miss out on it now. 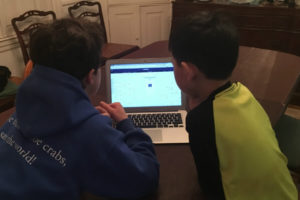 Have you filled out your NCAA bracket?

Our younger son made one to compete against the other grandchildren. I don’t have a favorite team in it this year, so I have no idea which teams he picked or why.

But I am happy he is grasping this essential life skill. I often feel we don’t do a good job raising our sons as sports fans because we just don’t care much about sports.

Thank goodness for cousins, who introduce us to all kinds of fun.

Find more quick takes on Kelly’s blog, This Ain’t the Lyceum, and have a wonderful St. Patrick’s Day!