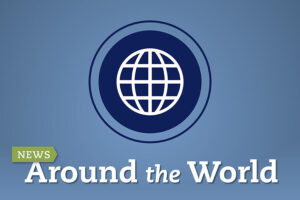 WASHINGTON (CNS) — Ray Repp, the liturgical musician who spearheaded the concept of the folk group-led “guitar Mass” with his “Mass for Young Americans,” died April 26 in Palm Springs, California, of complications from cancer. He was 77.

Repp’s first songs, issued in the years following the Second Vatican Council, were staples in thousands of parishes for decades afterward. Some of his best-known songs, more than a half-century after they were penned, include “Allelu!”, “Peace, My Friends,” “I Am the Resurrection” and “Hear, O Lord.” His song “Wake Up My People” was sung during a demonstration chronicled by author Jonathan Harr in his 1995 book “A Civil Action,” later made into a movie starring John Travolta.

Born in 1942 in St. Louis, Repp was a seminarian when he wrote “Mass for Young Americans.” Recorded in 1965, it set the tone for a new form of liturgical expression for a church that had just started celebrating Mass in the vernacular less than a year earlier. His works reportedly sold millions of copies and were translated in 28 languages. His composition “Into Your Hands” is popular at Spanish Masses as “Entre Tus Manos.”

Repp, who left the seminary prior to ordination, said later that demand for his music paradoxically increased after dozens of bishops across the United States banned the use of guitars at Mass. Ten years after “Mass for Young Americans,” there were about three dozen composers working in the contemporary liturgical idiom; by 2006, estimated Jesuit Father John Foley — one of the “St. Louis Jesuits” — at the time, about 175 were actively writing music for the church in that genre.

At concerts in the 1980s, Repp would say he was teaching a fourth grade religious education class when he realized he had nothing prepared one Sunday. So he took his guitar with him and worked with the children to write, on the spot, “Here We Are.”

Repp entered into a short-lived agreement with Our Sunday Visitor to create JORAL — an acronym for Jesus Our Redeemer and Lord — Records for his next album, 1974’s “Give Us Peace.”

He then partnered with an Oklahoma priest, Father Bill Kelly, to create K&R Records, which released Repp’s subsequent albums and those by other liturgical musicians. K&R also published a hymnal, “Life Songs,” and a quarterly journal, “Foundations of the Gospel in Life.”

He was involved in lawsuits over his music. First, Repp sued his first publisher, FEL, for breach of contract for not paying him royalties. A federal court in Chicago ordered FEL in 1988 to return the copyrights to Repp’s songs back to him, and to pay him $32,000 in back royalties.

In 1990, Repp sued Broadway composer Andrew Lloyd Webber for copyright infringement, claiming Webber had lifted the melody for “Phantom Song” from the musical “Phantom of the Opera” from Repp’s Marian hymn “Till You.” The case stretched out throughout the 1990s and included a Supreme Court rejection of a bid by Webber to have the case dismissed, but Repp lost at trial when the case was finally heard in 1999.

In recent years, Repp licensed the use of his copyrights to OCP Publications, which released two “best of” collections and has dozens of his songs available for individual purchase.

In the late 1990s, Repp was a featured performer at the Archdiocese of Baltimore’s Urban Evangelization Festival.