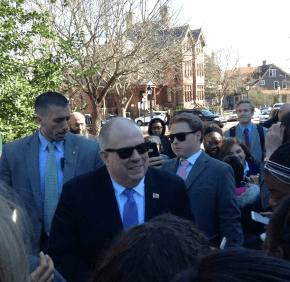 ANNAPOLIS – Confronted with a Miller Senate Office Building function room packed with nonpublic-school students and a late-to-arrive dignitary, the Maryland Catholic Conference’s Garrett O’Day did the sensible thing and opened the floor for questions.

“Are you a Republican or a Democrat?” a student from a Catholic school pointedly asked O’Day, demonstrating both the critical thinking skills and willingness to engage that may be cultivated in Maryland’s nonpublic schools.

The students were in the state capital March 2 for Nonpublic School Advocacy Day, an annual event organized by the Maryland chapter of the Council for American Private Education (CAPE).

The students – close to 1,400 registered, a record – rallied on Lawyers Mall and directly engaged their legislators in support of BOOST (Broadening Options and Opportunities for Students Today), a scholarship program that last year allocated $5 million from the state budget for children from families with low incomes who wished to attend nonpublic schools.

O’Day, who serves as associate director for education, children and families for the Maryland Catholic Conference, legislative lobbying arm of the state’s bishops, told the students that he and the other advocates in attendance were neither, professionally speaking, red nor blue.

“We often joke that we are purple, so to speak,” O’Day said.

Tired of being called into numerous parent-teacher conferences that did not solve the problem, he confided in his wife with a resolution:

“I need to turn her over to the nuns.”

Now, he told the students, she puts her talking to good use – as a lawyer.

Students in the crowd also discussed the advantages they have found in nonpublic schools.

“Catholic education is important because it really teaches us about our faith and how our values can be applied to our world,” said Theresa Wagner, a senior at St. John’s Catholic Prep in Buckeystown.

Kaysha Perry, a third-grader at Holy Angels Catholic School in Baltimore, said she was very happy in her first year in a nonpublic school.

“I like Holy Angels because the teachers are really nice, and there’s no fighting and no drama,” she said, adding that math is her favorite subject. “My daddy once told me math is the whole world. People call me a ‘mathlete’ a lot.”

As the students gathered on Lawyers Mall, Gov. Lawrence J. Hogan Jr. shook hands and posed for selfies before speaking in support of BOOST, to which he has proposed adding an additional $2 million for a total of $7 million.

“Last year, the speaker of the House, the president of the Senate, and every single member of both parties voted for this BOOST program,” he said, adding that some legislators this year “are trying to change their minds and move away from this, even though it’s a tremendous program.”

“With your help, we’re going to make sure they go back to the commitment they made last year,” Hogan told the students.

James Sellinger, chancellor for education for the Archdiocese of Baltimore, said BOOST scholarships had helped many students, who otherwise would not have had the means, attend nonpublic schools this year.

“We can’t afford not to keep them there next year, and more and more children need to be afforded the opportunity to come to our schools,” he said.

“You’re going to talk about you today,” she said. “That’s why we’re here today.”