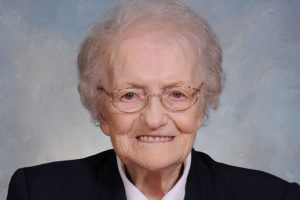 A funeral Mass was offered Sept. 19 at Assisi House in Aston, Pa., for Sister Angela Patrice Power, who had been a professed member of the Sisters of St. Francis of Philadelphia for 80 years. Sister Angela Patrice, who spent eight years teaching in the Archdiocese of Baltimore, died Sept. 12 at age 100.

Born in Dungarvan, County Waterford, Ireland, Sister Angela Patrice earned a bachelor’s degree in history from Mount St. Mary’s University in Emmitsburg. She served for 38 years in the Archdiocese of Philadelphia, 20 years in the Diocese of Wilmington, and the aforementioned eight in the Archdiocese of Baltimore, where she taught in the former St. Paul School and the former St. Katharine School. She also worked in formation at Immaculata Convent in Mallow, County Cork, Ireland; and at Our Lady of Lourdes School in Bethesda, Maryland.