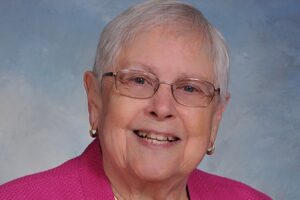 Sister Dorothy Franz, a Baltimore native who served in the Archdiocese of Baltimore for 58 of her 60 years as a professed member of the Sisters of St. Francis of Philadelphia, died Aug. 7 at Gilchrist Hospice in Towson. She was 80.

Formerly Sister Edward Miriam, she was raised in the Shrine of the Little Flower Parish in Belair-Edison and graduated from the Catholic High School of Baltimore. She professed her first vows in 1960, earned a bachelor’s degree in English from Neumann University in Aston, Pa., and a master’s in administration from Towson University. She ministered primarily in elementary education and parish ministry where she served as a director of religious education and director of the RCIA program.

Sister Dorothy taught at Our Lady of Mount Carmel School in Essex, Immaculate Conception School in Towson, and St. Clement Mary Hofbauer School in Rosedale. During her years at St. Mark Parish in Fallston, she served as DRE. Since 1996, she had ministered as director of religious education and as coordinator of the RCIA program at St. Paul in Ellicott City.

A funeral Mass was offered Aug. 12 at St. Paul in Ellicott City.