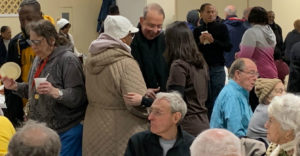 Archbishop William E. Lori introduced “The Journey to Racial Justice” to several hundred men, women and children who appeared to be part of the solution to the lingering systemic issues addressed in his latest pastoral reflection.

The archbishop’s second reflection on the topic in less than a year was publicly released Jan. 21 at St. Bernardine in West Baltimore. The occasion was the parish’s annual peace walk on Rev. Dr. Martin Luther King Jr. Day, named for its late pastor, Monsignor Edward M. Miller.

It included the remembrance of eight who were shot and killed in the surrounding blocks, but the fellowship in Harcum Hall that followed offered hope for a brighter day.

Much of that spirit came courtesy of St. Bernardine’s sister parish, St. John the Evangelist in Columbia, a partnership began when the respective pastors, Monsignor Richard Bozzelli and Father Gerald Bowen, got to brainstorming during the Archdiocese of Baltimore’s annual Catholic Campaign for Human Development awards luncheon.

The fruit of their conversation included two busses and four carloads from the Columbia faith community among those who heard Archbishop Lori’s remarks on his new reflection, with his very first recommendation being “Organizing training and resources for conducting forums throughout our institutions to discuss and address the issue of racism.”

Father Bowen said his people are moved in part “by a resurgence of racism and hatred. As a church, we want to make a public stand and witness. We stand with St. Bernardine as they continue the work of Dr. Martin Luther King Jr.”

Mike Lewis, a retired federal employee and parishioner of St. Bernardine for 13 years, was among those familiar with the visitors,

“We visited St. John’s for Mass last summer,” Lewis said. “The fellowship and camaraderie were a wonderful experience. To have them come here and experience our community, that’s a blessing. It’s more than just a ‘sister parish’ relationship. I hope this is the beginning of us coming together and having a serious discussion.”

“Even as we Americans celebrate the inspiring example of Dr. King today, we feel the shame of witnessing public demonstrations of racism, anti-Semitism and intolerance toward newcomers to our country such as we have not seen in decades,” he said. “Likewise, there seems to be no lessening of the institutional racism we see all around us – whether in the criminal justice system, employment, healthcare, education or political enfranchisement.”

Later, he said, “From our very first archbishop, church leaders, clergy and lay persons owned and relied upon the labor of enslaved persons. The fact that most institutions that can trace their past to the beginnings of this country were participants in the evil of slavery is no excuse.”

The program included reflections from Thomas Stewart Davis on Dr. King, and Joseph Oden Jr. on Monsignor Miller, who was pastor of St. Bernardine, 1980-2013. While an earlier pastor had preached segregation from the pulpit, Oden noted Monsignor Miller’s embrace of the faith community as it became predominantly black.

“You knew that we were not here to change the church, father,” Oden said, “but to enhance it.”

The program concluded with the Holy Spirit Prayer and the Prayer of St. Francis of Assisi, a parish custom begun by Monsignor Miller. A Code Blue warning because of the sub-zero wind chill kept inside prayers honoring murder victims, during which Deacon W. Paul Barksdale read their names.