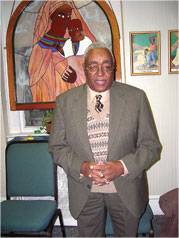 When St. Edward, Baltimore, parishioner Willie B. Harris Sr. retired from the Department of Defense 20 years ago, he knew he had to expend his pent-up energy in a productive manner.

The West Baltimore senior citizen became more involved in his parish and community and in 1999 became a founding member of SEALS (St. Edward’s Adoring Loving Seniors) – a group committed to providing the church with its members’ collective years of wisdom.

“Our group is involved in just about every aspect of the parish,” said Mr. Harris, who became president of SEALS in 2000, following the death of Diane Elmore, the original leader of the organization. “When SEALS first started, we only had 14 members. Now we have around 55.”

Members serve as lectors and extraordinary ministers of holy Communion, he said. The organized seniors also have representatives in the parish’s sodality group, the Why Catholic? program, the parish council, the Holy Name Society, the church soup kitchen and in the youth ministry.

“We’re trying to impress upon the youth in the parish how important it is for them to be involved in their church and their community,” said Mr. Harris, whose grandson is archdiocesan priest Father Raymond L. Harris. “They are our future.”

Members of SEALS meet at the St. Edward rectory every Thursday morning for Bible study, then attend 9 a.m. Mass and finish up with a weekly workshop to organize their many activities in the parish and community, he said.

“We also go on trips together,” Mr. Harris said, “just to be together.”

Raised in the Baptist faith, Mr. Harris converted to Catholicism when he married his Catholic wife – Dorothy L. Harris, 79 – in 1943.

Over the years, his wife encouraged him to become active in the parish and to “work hard for the church,” he said.

Mr. Harris said through its tireless work for the parish and community, SEALS continually evangelizes for the Catholic faith and includes its motto, “God said it. I believe it,” on all correspondence.