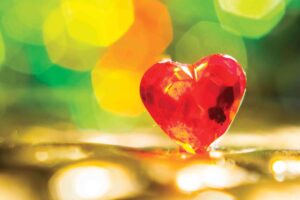 Many people associate this month with great happiness and joy due to the Feast of St. Valentine on Feb. 14. It’s appropriate to greet a day devoted to love with this kind of exuberance because it is such a profound gift of God to all of humanity.

Our knowledge of the facts of St. Valentine’s life has largely been lost to history, but most people agree that this third century Roman saint was martyred and buried along the Flaminian Way just north of Rome. Today, he is the patron of love, young people and happy marriages.

Some stories say he presided over marriages of many Christian couples in ceremonies done in secret due to religious persecution of the time. Another story about the final days of his life tells of how he was imprisoned and sentenced to death for refusing to renounce his faith. While in prison, he healed the jailer’s blind daughter, then left her a note on the day of his execution, signed, “Your Valentine.”

Regardless of the accuracy of these stories, they help to reveal the spirit of a saint of the Church and bring into focus a profound message about love for our times. Valentine valued the sacrament of marriage so much that he was willing to risk his life to facilitate these important ceremonies for young couples. The love that comes into focus through these stories about his life is marked by fidelity, sacrifice  and faith, and these are the hallmarks of true love that bring about the happiness and joy associated with St. Valentine’s Day.

Fidelity is at the heart of the pledge made by couples in marriage, and St. Valentine understood the value of their pledge to each other in this way. The Church continues to call men and women who fall in love to form such bonds of permanence in matrimony today. In addition, St. Valentine’s Day can also be about more than romantic love. One mother recalled giving chocolate hearts to her children on Valentine’s Day every year to show how much she loved them.

The stories surrounding the life of St. Valentine teach us that sacrifice is the ultimate gift that love demands of us. Valentine payed the ultimate price for practicing his faith and helping others to do the same. He was a tireless evangelizer and one story even tells of how, after being arrested for practicing Christianity, he tried to convert the Emperor Claudius. It was this attempt to persuade the Emperor that led to his execution.

This kind of sacrificial love is a model for those who pledge themselves in marriage—and for families in general. Spouses need to be prepared to sacrifice for each other and for their children. The love we celebrate on St. Valentine’s Day can lead people to be emotionally prepared to make profound sacrifices for each other, but it is faith that can sustain our commitment to do what is best for others even under the most trying circumstances.

We see such faith exercised by St. Valentine in the story of the first Valentine note given to the jailer’s daughter after she regained her sight. Even facing death, St. Valentine showered blessings upon his persecutors. This kind of mercy is the fruit of forgiveness and it is the essence of the love of God. Let us share this love on St. Valentine’s Day and throughout the year so that lasting relationships based on fidelity, sacrifice, and faith blossom in our lives and in the lives of all we encounter.