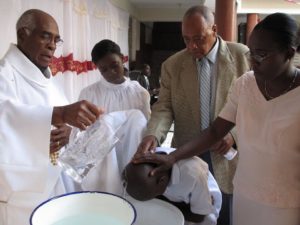 There are stories I’ve penned throughout the years which have set into my core. During my tenure as a staff writer for the Catholic Review (2005-2009), having interviewed several parishioners around the Archdiocese of Baltimore who took mission trips to Haiti, I never forgot the experience of Patrick Hassan, a then-16-year-old boy who was profoundly affected by his journey there.

Hassan, a parishioner of St. Bernadette in Severn, returned a transformed American teenager. That Christmas, he requested his parents donate to Haiti the money they would have spent on his gifts. What 16-year-old kid do you know who has done that???

He brought back small bags of te (or gallette) and kept one on the kitchen table to remind himself not to waste food or overeat while the Haitians starved. He gave away other bags to friends and relatives to describe the Haitians’ desolate predicament and to create awareness. (Te are clay cakes which Haitians make, sell, and eat – a mixture of mud, salt, margarine, and water stirred into a batter, formed round, and set in the sun to dry. They are a substance simply to fill empty bellies when no food is available; the cakes have no nutritional value and are tasteless.)

I also never forgot Deacon Rodrigue Mortel, a medical doctor I met and knew while he was director of our archdiocese’s Missions Office. I first encountered him at a staff luncheon and met with him later in other meetings, interviews and gatherings. I was instantly captivated by his bubbly personality and playful humor. Hearing his accent, I curiously asked where he was from. I was not expecting his answer of “Hershey, Pennsylvania” – that’s not a foreign country, that’s the land of chocolate! I truly thought he was teasing, since his skin is the color of chocolate. (He wasn’t – he lives there.)

Deacon Mortel is a Haitian from St. Marc who once was a poor child growing up in a small country whose people do not have much except spiritual richness and mirth.

“I was born into poverty, but it did not define me,” he wrote, “my character did, and still does … growing up poor was a blessing; it trained me to survive and thrive even in adversity.” Haiti is ranked the poorest country in the Western Hemisphere. Nearly 60 percent of its people live below the poverty line and 40 percent are illiterate.

I bought his book, Go, and do the same: Schooling a new generation for Haiti* simply because Deacon Mortel wrote it. I admire the man for what he marvelously accomplishes for Haitian children – and for his passion about it. Because of him, I annually sponsor one of his students of his two schools, Les Bons Samaritains (Good Samaritans) and Collège James M. Stine.

“On the side” from his career as a successful obstetrics doctor, chairman of the Department of Obstetrics and Gynecology at Penn State College of Medicine; associate dean and founding director of the Penn State University Cancer Center; and a Catholic deacon, Deacon Mortel scrupulously built the two schools for the kids of his country to have improved circumstances and opportunities later. He built them as a devotion to his mother who “worked herself to an extreme so that I could have something that eluded her all her life … the simple pleasure of reading and writing.”

Haitians generally do not like to tell others where they are from; but not Deacon Mortel. Because of his lowly upbringing, because of his adoration for his people, because of his vocation to support them … he tells the world! Haiti is in his heart. The result is “the world” donates money, resources and their time as volunteers, all to aid these deprived children from poor villages to have futures other than baking and selling mud cakes.

His uplifting story shares accounts of a handful of students deeply affected by their earned education, not possible if not for their friend, Deacon Mortel, who inspires us to “go, and do the same” for others.

To learn more about Deacon Mortel’s vision come to life or to sponsor a student, visit www.highhopesforhaiti.org.