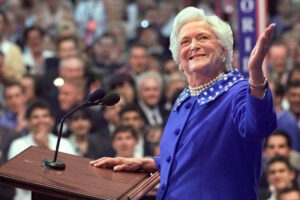 In a culture where females are pressured to think a face-lift is just a matter of time and slimness is non-negotiable, she was an attractive natural with a matronly figure and soft white hair.

A champion of literacy and a woman devoted to family, she was also known as being “ferociously tart-tongued” according to her daughter-in-law, first lady Laura Bush. That’s not always a bad thing, but it didn’t serve her well in 1984.

That year, Geraldine Ferraro was the Democrats’ candidate for vice president, the first woman ever nominated to a major party ticket, running with presidential hopeful Walter Mondale. They were up against President Ronald Reagan and his vice president, Barbara’s husband George H.W. Bush.

In a highly publicized remark, Mrs. Bush referred to Ferraro as “that 4 million dollar … I can’t say it, but it rhymes with rich.”

The requisite canned apologies were quickly rendered and accepted, but the remark lingered in my idealistic young mind as catty and beneath the dignity of a presidential race.

However, in an article after her death, I read her 1988 reflections on that comment, and it changed my perspective entirely.

“It was dumb of me. I shouldn’t have said it,” Mrs. Bush acknowledged. “It was not attractive, and I’ve been very shamed. I apologized to Mrs. Ferraro, and I would apologize again.”

Now, that’s genuine. Can you imagine a public figure today using the words “dumb” or “shame” to describe a mistake they had made?

Today’s apologies, if ever rendered, usually start with “I’m sorry if someone was offended …” as if the real fault lies with those of us who took offense, oversensitive souls that we are.

That’s, of course, assuming there is an apology.

The name-calling that marked the 2016 presidential race has never provoked any apologies, nor do many remarks that stain social media and public discourse nearly daily. The bar for civility has been plummeting from the top down, and it’s trickling into everything from the comments section of social media to the comedy performed at the White House Correspondents’ Association dinner.

Pope Francis recently provided a beautiful example of apology. When he visited Chile in January, he made some unfortunate remarks about victims of sexual abuse there, saying they were guilty of “calumny” for continuing to call out a bishop they feel complicit in an abuse case.

There was a huge uproar over the pope’s remarks. Instead of digging in, retrenching and defending his comments, Pope Francis took criticism to heart, investigated further, and, according to Catholic News Service, “apologized for underestimating the seriousness of the crisis in Chile.”

He asked for forgiveness and began to meet personally with those who had suffered from his remarks. It’s almost unheard of to find such genuine public acknowledgement of error.

Perhaps because we live in such a litigious society, nobody wants to admit, “I did it.” But I think it goes deeper than that.

The sacrament of reconciliation is neglected these days. Could one reason be a growing cultural disinclination to face the fact that we sometimes do and say shameful things? We make it complicated, giving ourselves excuses. We say “I’m sorry but …” here’s why it’s really your fault.

It takes a humble, truthful and thoughtful person to acknowledge error publicly. It’s both a gift to us, and an example we should follow.