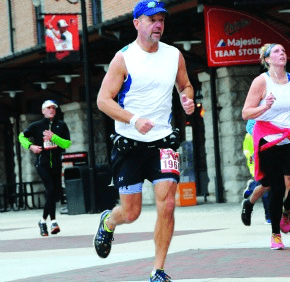 The majority of New Year’s resolutions to lose weight or exercise more fall by the wayside.

Then there are those for whom fitness is a year-round endeavor – such as Monsignor Richard Hilgartner, the pastor of St. Joseph in Cockeysville who waited until well into his fifth decade to find his rather impressive running stride.

The 47-year-old priest completed the 2015 Baltimore Marathon last October in 3 hours, 53 minutes, 23 seconds, a personal best that put him among the top 31 percent of male finishers in his 45-49 age group.

The discipline inherent in a priest’s life, it seems, dovetails rather nicely with running.

“It’s very easy, when the weather is bad, to talk yourself out of a workout,” Monsignor Hilgartner said. “It becomes evident pretty quickly, when you have fallen off the wagon, the harder it is when you try to get back into running.

“It’s the same way with prayer; it’s easy to take yourself out of your relationship with the Lord. If you ignore it, the harder it is to get back into it.”

Fit in around morning Mass, prayer is often woven into the solitude of his four-mile runs; longer runs on the weekend bring other benefits.

“As a priest, I’m always active in some way, but since this became more intensive, my energy level has increased,” Monsignor Hilgartner said. “Plus, I’ve developed some great friendships through running, with parishioners, and others I’ve met through parishioners.”

As to the challenge, it is not as if he was looking for one.

Monsignor Hilgartner is the pastor of a parish of 3,000 families, one with a burgeoning Hispanic ministry and an ambitious plan to expand its liturgical music, no surprise, as he is the president of the National Association of Pastoral Musicians.

While his sisters, Kristy and Maura, and several cousins were accomplished lacrosse players, he played little league sports but eschewed athletics once he got to Calvert Hall College High School in Towson, where he played trumpet in the marching band.

“The band was treated like a varsity sport, and it was not exactly a sedentary activity,” he said. “I probably could have run cross country. The flip side is, compared to people my age, my knees are fresher.”

He caught the running bug in Washington, D.C., where he served the U.S. Conference of Catholic Bishops’ Secretariat for Divine Worship, first as an associate, then as executive director, from 2007 to 2014.

A 10K led to a 10-miler, then the Baltimore Half-Marathon in 2010, and then the 2012 Marine Corps Marathon in D.C. Now he’s familiar with the age-group qualifying standards for Boston (3:25 would require a time commitment he is unwilling to make) and New York (at 3:35, on his “bucket list”).

Of the value of goals, Monsignor Hilgartner said, “I always have a marathon on my calendar.”

Next up is the Disney Marathon Jan. 10, in Orlando. Father Gerard Francik, a fellow Calvert Hall grad, will make his half-marathon debut there the day before.

“I would not be doing this if he hadn’t encouraged me,” said Father Francik, 55, sharing the MapMyRun app that displayed his mileage for November, 54.3 miles. “My blood pressure is the best it’s ever been, and this has gotten me out in weather I would not have otherwise been out in.”

Father Francik is the not the first instance of Monsignor Hilgartner being as adept at encouraging runners as he is at evangelizing.

At last September’s charity 5K for the Little Sisters of the Poor, his parish registered the most entrants and took home the “Flying Nun” trophy.

Running for others: Annual Ignatian 5K a spiritual exercise