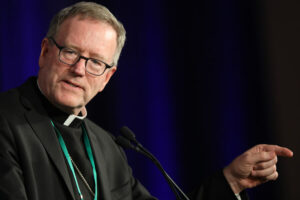 Last week, I gave a presentation at the USCCB Spring Meeting in Baltimore. My topic was what I identified as the second greatest crisis facing the Church today—namely, the massive attrition of our own people, especially the young. I trust that the first—around which most of our discussions that week revolved—is obvious to everyone. Judging from the extremely positive reaction of my brother bishops and the lively conversation that followed my presentation, the talk was well received. I was also delighted it apparently prompted a spirited conversation on social media.

After laying out the rather dismal statistics regarding the “nones” or the religiously unaffiliated—50% of millennial Catholics now claim no religious identity, for every one person who joins our Church, six are leaving, etc.—I commenced to offer some reasons why so many are exiting. I told my brother bishops that these were not the fruit of idle speculation but rather of the many statistical and sociological studies that have been conducted regarding the phenomenon. The number one reason—reiterated in survey after survey—is that young people are quitting the Church because they don’t believe in the teachings of classical Christianity. Moreover, the studies consistently maintain that this lack of belief is often because religion is seen as conflicting with science. Other factors, I continued, include the general secularism and moral relativism of the culture, the difficulty many young people have with the Church’s sexual teachings, and the supposed correlation between religion and violence.

Having presented these findings, I then shared what I take to be signs of hope. The first is that, among the unaffiliated, there are relatively few fierce atheists or determined opponents of religion. Most are indifferent to faith and have drifted rather than stormed away from the Church. A second indicator of hope is the massive presence of young people on social media platforms that trade in religious topics. I mentioned my own participation in a Reddit AMA (Ask Me Anything), which yielded almost 12,000 comments and questions, making it the third most discussed exchange of its kind last year. Even though many, if not most, of those who joined in that conversation proposed challenging questions, or made skeptical observations, the undoubted interest in matters religious is something to build on. Finally, I referenced what I called “the Jordan Peterson phenomenon.” I was drawing my brothers’ attention to the rather extraordinary fact that a mild-mannered, soft-spoken psychology professor, speaking of serious matters in a sober way, could attract tens of thousands to arenas and millions to his social media sites. I told my fellow bishops that most recently Peterson has been lecturing on the Bible, causing armies of people, especially young men, to take a fresh look at the Scriptures. I explicitly said that my reference to Peterson in no way signaled a one-sided or uncritical endorsement of his teaching. Nevertheless, his emergence and his success are, I argued, indicators that we could get a serious message across to a wide audience.

The reaction to my talk outside the walls of the bishops’ conference ballroom was, as I say, interesting. Most reacted very positively to my observations and suggestions, but some, on both the extreme left and the extreme right, took exception to what I said. On the starboard side of the spectrum, there were comments to the effect that I had underplayed the importance of the clerical sex abuse scandals. Well, no one has been more vehement in his denunciation of these outrages than I (see my recent Letter to a Suffering Church for the details), but judging from the available data, it’s simply not the case that the scandals are a major driver of disaffiliation. They indeed appear as a factor, but not a significant one, certainly in comparison with the causes I named above. I get the passion around this issue, but it shouldn’t prompt us to draw conclusions not supported by objective evidence.

But I was especially surprised, and more than a little amused, by the overheated response from some on the far-left end of the spectrum. It appears that the mere mention of the name Jordan Peterson is enough to send some into irrational conniptions. Though I had unambiguously stated that my reference to the Canadian was in no way meant as an endorsement of the entirety of his thought, some commentators and combox denizens characterized me as a Peterson disciple, an apologist for his program, a lackey. One particularly hysterical observer had me “basing my apologetics” on Jordan Peterson! Oy vey. As I have made clear in my own articles and videos, Peterson reads the Bible through a Jungian, psychodynamic lens, and hence, by definition, does not read it adequately. It is not even evident that the Canadian believes in God in the accepted sense of the term. “Basing my apologetics” on him?! Give me a break.

What is particularly sad to me is that the commentariat, especially in regard to religion, has become so polarized and ideologically driven that the most elementary distinctions aren’t made and the most broad-brush analyses are commonplace. What makes it sadder still is that these distortions and projections stand in the way of addressing the vitally important issue under consideration. As left and right defend their respective ideological bailiwicks, the Church continues to hemorrhage young people. If we want to get serious about a problem that ought to concern everyone in the Church, it would be wise to attend to objectivities.