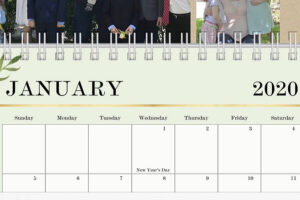 Every Christmas our family presents my parents with a beautiful calendar full of grandchildren pictures.Everyone loves the calendar. Everyone except, well, maybe the person who knows the calendar is going to be her responsibility the next year.

This year, that person was yours truly.

The task only comes my way every four years, but when it does, it’s a big deal.

Weeks ago, I reached out to the other parents who are involved and asked them to send photos. By now everyone knows the drill. Send individual shots of all of your children, a Halloween costume shot, at least one family photo, and good (or mostly good) photos of your children interacting with other cousins.

The photos started pouring in, and they were fantastic. Then I combed through the photos of my children—and of them with their cousins. And there were even more.

My parents have 18 grandchildren (on earth), which might not sound like many to some families, but as I started the acrobatic act that is the calendar design, it definitely felt like a large group. As I inserted photos, I tried to keep track of how many times each child was on each page and removed and replaced and rethought many of the pictures.

Just trying to mark all the birthdays on the calendar was its own mountain to climb. Don’t tell my younger son that I forgot his until the last moment.

At one point, I sent it to my sister Treasa and asked her to double-check me on the photos of her twin boys. They’re not identical, but…well…I’m not an aunt who is 100% sure which is which at all times. I joked that I had probably included too many of one twin and not enough of the other.

And goodness knows, there were way too many photos of Maureen’s son Origen, who seems to have been on a 2019 Cousin Group Photo Tour. He seemed to be in every shot in five states!

I wasn’t striving for perfection. Several hours into the ordeal, I just wanted the calendar to be done. But if I had to give up hours of my Christmas prep time to this project, I couldn’t resist having some fun with it.

So, my older son and I set out to design the cover with individual shots of all the grandchildren in a secret order. You see, my mother has a display of her grandchildren’s photos in her house. She changes the order of the photos without explanation, and we have to guess the rationale. The last one was done alphabetically by middle name. The current one has stumped many of us because it’s such an obscure strategy.

But the one in the calendar? Thanks to a sixth grader with a strategic chess player’s mind, we are taking it to a whole new level. He asked me for a list of everyone’s full name and birthdate (which may have taken me a while and a few text exchanges to pin down), and then he concocted a plan.

Grandma—who loves a good puzzle and used to write notes to me in cryptogram form—has no idea what’s coming her way under the tree.

And, just like Santa’s sleigh, the calendar is set for delivery on Christmas Eve.

Whew. One more piece of Christmas prep is complete.