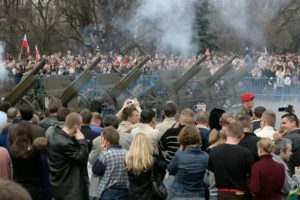 As we mark the centenary May 18 of the birth of Karol Wojtyla, who became St. John Paul II, it caused me to reflect on moments of my life that intersected with the man who was pope for a great chunk of my life and career in Catholic journalism.

As a college seminarian in the fall of 1978, we followed intensely the death of Pope Paul VI and the election of John Paul I. A month later, one of my classmates burst into the dorm and said, “The pope is dead.”

Most of us reacted in disbelief, as this classmate was a bit of a joker. “Not funny, Jeff. That was last month,” I said.

“No, it’s true. The pope just died.” We turned on the radio to hear the news, and a bunch of us headed to the chapel for impromptu prayer.

A few weeks later, we learned the next pope would be an anomaly – the first non-Italian in the office since the 16th century. His two successors have also been non-Italians.

A year later, the traveling pontiff visited Chicago, among several stops on a visit to the U.S. While he was meeting with the U.S. bishops at Quigley Seminary South, my high-school alma mater, the archdiocese gathered all its seminarians for a Mass in the parking lot. Pope John Paul II interrupted our Mass to greet us and give us his blessing.

I wrote a piece on that visit from a seminarian’s point of view for the archdiocesan newspaper, The Chicago Catholic. It’s the first piece of journalism for which I got paid and, in some ways paved the way for my career in the Catholic press, as I leveraged the connections I made in that newsroom to launch my career after college.

By 1984, I was working at The Chicago Catholic, and traveled to Poland and Rome on a pilgrimage led by Cardinal Joseph Bernardin with 23 priests from the Archdiocese of Chicago. We toured 1,500 miles around Poland to visit key spots in the life of the church there. Among those, of course, were Wadowice, where we saw the small apartment where Karol lived as a boy, and the church next door where he was baptized.

We also saw the archbishop’s residence in Warsaw where he lived while he served there.

Martial law was in effect in Poland in those days, at the height of the Solidarity movement. On a flight to Rome from Poland, I asked Cardinal Bernardin if he was going to give the pope a report on what we had seen of the condition of the church in his homeland. He was sure the pope would welcome news of how warmly the Chicago delegation had been received, but he didn’t need a news report. “Believe me, the pope has much better connections in Poland than I do.”

During that visit in Rome, we were privileged to attend a private Mass in the pope’s chapel in his residence. The pope distributed Communion to the dozen or so lay people at the Mass, so I was able receive the Lord from the hands of his vicar on earth. Afterward, we met the Holy Father in a receiving line in his library next to the chapel.

A few years later, I had moved to Phoenix to start the Catholic Sun diocesan newspaper. Phoenix was somehow selected as one of nine cities the pope would visit on his trip to the U.S. in 1987. As part of the communications planning team for the visit, I was designated to ride in the motorcade with the papal entourage. So at each of the pope’s stops on that whirlwind day, I entered the venue steps behind the pope.

At the basketball arena where John Paul met with members of Native American tribes, I had to get the film from our four pool photographers who were stationed near the stage for the pope. In order to get the photos transmitted via wire services as soon as possible, even during the event – a novelty in the days before digital photography – I had to get the film to a darkroom specially set up for the day.

As I walked up to a gate to get to the arena floor, security guards were waving away anyone who tried to enter. When I walked up, the guard looked at the small lapel pin I wore that gave me unlimited access to within 10 feet of the pope, simply waved me through, and closed the gate, again deterring anyone else.

The next morning, before the pope left Phoenix, my family and I were among those who helped plan the visit who got to greet the pope as he left the bishop’s residence. As John Paul came along the row, he quickly greeted each person. When he got to us, he saw my son, 4, and daughter, just a year and a half old, and said, “Oh, a baby.” He touched each of their cheeks and asked how they were. And then he moved on – the start of a few more days on the road.

In 1998, I was part of a small group of young Catholic journalists from around the world learning about the intersection of faith, media and culture in Western Europe. We spent a week in Switzerland, a week in France, a week in Rome and then back to Switzerland for a final week, with guest lecturers every day.

At that same time a delegation from Phoenix was visiting Rome. I joined the Phoenix group for the Wednesday general audience, where we saw the pope from the seats. I should have stayed with the journalists’ group; the pope came to greet them after the audience.

During that week in Rome, one of our guest teachers for the day was one of the most influential theologians in the church, Cardinal Joseph Ratzinger, who was then prefect of the Congregation of the Doctrine of the Faith. He later became Pope Benedict XVI.

In early 2005, John Paul was dying and a papal transition was expected soon. The Catholic Press Association put together a small group of journalists to visit Poland to learn more about John Paul and where he had grown up, what had shaped him as a person, as a man of faith and a man of the world, so we could better report on his impact.

The day our group was due to leave the U.S., Pope John Paul II died.

As we landed in Poland, the country was in mourning. Returning from dinner, our bus drove past a large open park where John Paul had celebrated Mass on one of his return trips to his homeland. The vast field was full of people, each holding candles. A few of us got off the bus and joined the vigil.

As we worked our way to the center of the field, we talked with as many people as we could. We heard their pain and sadness. There was a small section in the center of the field where people had left vigil candles on the ground. They would work their way into the center, pray for a while, leave a candle and then move out for others to do the same. They sang, they hugged, they cried.

A few days later, we had visited the archbishop’s residence where I had been 20 years before with Cardinal Bernardin. There was a large makeshift memorial of candles, flowers and memorabilia – soccer scarves, photos and such.

Each site we visited was a chance to talk with Poles who had lost a father and a friend. Our Polish guide stopped trying to get us back to the bus on time for our next stop – he was tired of hearing “just one more interview” from us.

At 2 a.m., I was working on a story and one of my fellow travelers poked his head in the hotel room. “Want to go see whether anyone is at the archbishop’s residence?” Why not? And there were. Dozens of people in the middle of the night had come to pay their respects.

The pope’s funeral was simulcast in Pilsudsky Square in Warsaw so that Poles could be one with those in Rome. Hundreds of thousands turned out. At the end of the Mass, a 21-cannon salute rocked the square.

That evening, a reported 200,000 people jammed the streets for an impromptu procession in tribute to the future saint. At 9:37 p.m., six days to the minute after the pope had died, the group stopped. They sang one of the pope’s favorite hymns, and then burst into an ovation that defined “thunderous applause”; as the sound echoed off the buildings, it was so loud it set off nearby car alarms.

I also had a chance to be in Rome for John Paul’s beatification in 2011. The ovation there when Pope Benedict announced that he was Blessed John Paul was as sustained and deafening as the one in Poland six years earlier.

It’s no surprise that St. John Paul II had a profound impact on my life and career. You can’t be a Catholic journalist and not pay attention to the pope. But I’ve been privileged to have close-up connections to Pope John Paul II, and as we mark his 100th birthday, I wonder what my life and work would have looked like without these encounters.