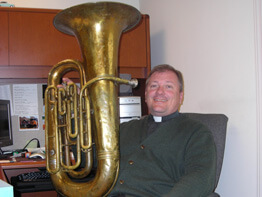 HAGERSTOWN – Balancing a shiny brass tuba on his thigh, Father Kevin Mueller took a deep breath and pumped a lungful of air into the slightly-dented instrument.

At the priest’s command, the tuba sprang to life – filling his rectory office with deeply resonant, low-pitched oom-pahs that flew out of the big horn at a breakneck pace.

With New Orleans-style jazz music blasting from his computer, the pastor of St. Mary in Hagerstown enthusiastically played along with the peppy tunes, tapping a foot in time with the ragtime beat and clearly loving every minute of it.

“Now that’s my kind of stuff!” Father Mueller exclaimed, pausing from his short practice session and adjusting the volume even louder.

When Father Mueller needs to unwind from a long day’s work, music is his refuge. Playing mostly by ear, the priest has enjoyed playing the tuba and piano for many years and he’s now working on sharpening his skills on the clarinet.

“I’m at their level,” he explained with a laugh. “I do it to practice. I don’t stir things up.”

The students enjoy seeing a different side of their pastor, he said, and he loves being part of an ensemble. The multi-talented priest’s dream is to play the tuba in a 1920s dance band, but there are none that he knows of in Hagerstown.

“No one plays that kind of music anymore,” he lamented. “It’s a sadness for me.”

Father Mueller said he is a fan of jazz greats like Fletcher Henderson, Bennie Moten and Luis Russell. He doesn’t care for modern music – and by “modern” he means anything from the Swing Era on.

The most difficult part of playing the tuba is having good embouchure – the position of the mouth, lips and teeth on the mouthpiece, he said.

“After playing for a while, you lose power and air comes out the side of your mouth,” said Father Mueller, who doesn’t get to play his tuba as often as he would like. “You have to build up strength over time.”

Musicianship runs in the Mueller family. The priest’s grandfather was a well-known accordionist and pianist who played at prominent Baltimore hotels.

While St. Augustine famously said that he who sings prays twice, Father Mueller admitted that he doesn’t get much spiritually from his love for music.

“When I hear music – even spiritual music – I get into it too much,” he explained. “I’m paying too much attention to the music itself. Singing as prayer doesn’t work for me.”