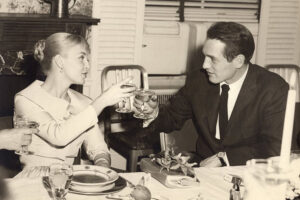 NEW YORK (CNS) — Successful marriages tend to be a rarity in Hollywood. So it’s remarkable that storied actor Paul Newman’s union with fellow star Joanne Woodward endured for 50 years and only ended with his 2008 death from lung cancer, age 83.

Affectionate yet forthright, the profile “The Last Movie Stars” takes a clear-eyed look at this often-mythologized bond. Produced in conjunction with CNN Films, the six-and-a-half-hour documentary begins streaming Thursday, July 21, on HBO Max. It will air in five hourlong episodes, followed by a 90-minute finale.

The genesis for the series was a proposed memoir Newman eventually abandoned. In 1998, Newman burned interviews recorded for the book. But Hawke enlists numerous actors to narrate the surviving transcripts.

The skillful interpretations of these reflections mark “The Last Movie Stars” as superior programming. George Clooney and Woodward mentee Laura Linney are especially notable in voicing the famed spouses.

The show frankly confronts an aspect of the relationship that has too often been conveniently overlooked: When the pair began their romance in 1953, Newman was already married — to Jackie Witte (Zoe Kazan).

In fact, in one of the film’s more poignant moments, Paul and Jackie’s youngest daughter, Stephanie, describes the devastating impact her father’s adultery had on his young family. Jackie, Stephanie recalls, had to “watch my dad and stepmom ride into the sunset with Hollywood contracts,” thwarting her own dream of becoming an actress.

Newman and Woodward had three children of their own, and the program explores how their careers affected the blended household thus formed. Woodward was the first to hit the headlines, winning an Academy Award in 1958 for her portrayal of a woman with multiple personalities in “The Three Faces of Eve.”

Newman’s breakthrough came with the role of pool shark “Fast Eddie” Felson in the Oscar-nominated 1961 film “The Hustler.” Newman reprised the character for “The Color of Money.”

After “The Hustler,” Newman’s legend grew, and Woodward, receding from the spotlight, struggled with her ambivalence over motherhood. “If I had to do it all over again, I might not have children,” she observes. “Actors don’t make good parents.”

As for his view of fatherhood, Newman is understated, to say the least. “I taught them how to drive well,” he says of his kids. “That’s probably the extent of my parenting.”

Indeed, Newman had a prodigious capacity for consuming booze that has frequently been misguidedly romanticized. Here, it’s dealt with more straightforwardly, leading to the stark conclusion that Newman was a functional alcoholic.

Hawke should have edited Newman’s gratuitously salacious commentary about the nature of his physical attraction to Woodward. “The Last Movie Stars” also contains other sexual material, including discussions of homosexuality, as well as some rough language. The script deals, moreover, with such mature topics as drug abuse, racism and various forms of violence.

Hawke is, at once, both the best and worst thing about his biography. By combining richly evocative songs, home movies and voiceovers with clips from the actors’ films, he movingly connects viewers to what was happening in their lives at any given time.

This is absorbing work. But Hawke’s insistence on interjecting himself into his otherwise compelling documentary ultimately weakens it. Thus he complains about his Wi-Fi connection, talks about what he wants to accomplish with certain scenes and speculates about CNN’s potential issues with the program.

Viewers willing to overlook these irritating distractions, however, will be rewarded once the focus returns to the show’s proper protagonists. Their story of frailty and forbearance will not only affect, but linger with, its audience.