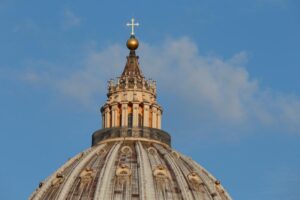 VATICAN CITY (CNS) — The Vatican’s Congregation for the Doctrine of the Faith released a 17-page document offering a step-by-step guide for how bishops, religious superiors and canon lawyers are supposed to handle accusations of alleged abuse by clerics against minors.

While nothing in the text is new, nor does it reflect any change to current church law, the handbook is meant to present clear and precise directions, procedures as well as attitudes church leaders should have toward victims, the accused, civil authorities and the media.

Cardinal Luis Ladaria, prefect of the Congregation for the Doctrine of the Faith, said the handbook, called the “Vademecum,” was the result of numerous requests by bishops and superiors of men’s and women’s religious orders “to have at their disposal a tool that could help them in the delicate task of correctly conducting cases regarding deacons, priests and bishops when they are accused of the sexual abuse of minors.”

“The course of justice cannot alone exhaust the church’s response, but it is necessary in order to come to the truth of the facts,” Cardinal Ladaria said in a statement published by the Vatican July 16.

“This is a complex path that leads into a dense forest of norms and procedures before which ordinaries and superiors sometimes find themselves lacking the certainty how to proceed,” he said.

Cardinal Ladaria said the handbook was “designated as version 1.0” and will be subject to future updates.

It will be adapted to any eventual developments of canon law as well as to “respond to new challenges that experience will offer to the juridical treatment of the cases in question,” he said.

He also said it will be updated in the future with considerations from dioceses and church institutions whose “qualified contribution will help to correct, integrate, specify and clarify those points that, as is only natural, require deeper reflection.”

Some of the more notable clarifications of current norms and procedures include:

— Information about alleged abuse does not have to come as a formal complaint to an ordinary. The church leader can learn about it from a third party, anonymous sources and even through social media. “It is not advisable to dismiss the matter” outright, it said, no matter how dubious or uncertain the claim.

— In the case of an accusation being made during confession, the priest must respect the sacramental seal, however he “should seek to convince the penitent to make that information known by other means, in order to enable the appropriate authorities to take action.”

— Upon learning of an allegation, the ordinary “ought” to begin a preliminary investigation and gather and safeguard evidence. Even if the report is determined to be unfounded, the accusation, all documentation and an explanation for the ordinary’s decision should be kept and a note about the decision should be sent to the doctrinal congregation.

— “Even in cases where there is no explicit legal obligation to do so, the ecclesiastical authorities should make a report to the competent civil authorities if this is considered necessary to protect the person involved or other minors from the danger of further criminal acts.”

— In situations not involving a minor, but that are “cases of improper and imprudent conduct,” it said, “should it prove necessary to protect the common good and to avoid scandal, the ordinary or hierarch is competent to take other administrative provisions with regard to the person accused, for example, restrictions on his ministry, or to impose the penal remedies” in order to prevent further delicts.

— The ordinary or his delegate is responsible for the preliminary investigation, which is not a trial, but a phase to collect information, and any “eventual omission of this duty could constitute a delict subject to a canonical procedure” in conformity with canon law and Pope Francis’ document on accountability, “As a Loving Mother.”

— Church authorities were urged to seek help from the doctrinal office or experts at any point in the proceedings.

— During the investigative phase, “a decision to be avoided is that of simply transferring the accused cleric from his office, region or religious house, with the idea that distancing him from the place of the alleged crime or alleged victims constitutes a sufficient solution of the case.” Other precautionary measures, which the document refers to, should be considered.

— If the church receives “a legitimate executive order requiring the surrender of documents regarding cases, or order (for) the judicial seizure of such documents, the ordinary or hierarch must cooperate with the civil authorities.”

— When it comes to whether the bishop or superior must inform civil authorities upon receiving an allegation and opening its own investigation, it said leaders should consider the “respect for the laws of the state” and “respect for the desire of the alleged victim, provided that this is not contrary to civil legislation.” Alleged victims should be encouraged to exercise their duties and rights as civilians in regard to state authorities.

— While the “secret of office” was to be respected by church personnel, “it must be remembered, however, that an obligation of silence about the allegations cannot be imposed on the one reporting the matter, on a person who claims to have been harmed, and on witnesses.”

— Accusers were also to be kept informed of the proceedings if they so desired.

In an effort to help those responsible for handling abuse allegations and to collect testimonials of credibility with regard to the complainants and the alleged victims, the congregation included a form to be filled out, listing what it considers “useful data that those carrying out the preliminary investigation will want to compile and have at hand.”

In an interview with Vatican News July 16, Archbishop Giacomo Morandi, secretary of the Congregation for the Doctrine of the Faith, said it is “the first time the procedure is described in an organized way — from the first report of a possible crime to the definitive conclusion of the cause — uniting the existing norms and the praxis of the congregation.”

He also affirmed that the guidelines ensure that anonymous complaints of abuse, which were often disregarded, are taken more seriously now and that ignoring a complaint “because it is not signed would be wrong.”

“It has become clear that a peremptory attitude in one sense or another is not conducive to the search for truth and justice,” he said. “How can a complaint which, even if anonymous, contains certain evidence (i.e. photos, films, messages, audio), or at least concrete and plausible clues of the commission of a crime, be thrown out?”

Archbishop Morandi said that while some crimes are recent, the congregation is “still witnessing reports emerge of old cases, sometimes many years later.”

Nevertheless, he said, “when this phase of past cases emerging comes to an end, I am convinced (and we all hope so) that the phenomenon we are witnessing today can recede.”

Plans to publish the handbook were first announced at a press briefing at the end of the Vatican summit on the protection of minors in 2019.

Jesuit Father Federico Lombardi, who served as moderator of the four-day summit, said at the time that the handbook would be available in “a few weeks or month or two.”

Archbishop Morandi told Vatican News that the delay in publishing the handbook was “due to extensive analysis work, not only within the congregation but also outside of it, with experts in the field, other dicasteries, and in particular with the Secretariat of State.”

The summit brought together Pope Francis and 190 church leaders — presidents of bishops’ conferences, the heads of the Eastern Catholic churches, superiors of men’s and women’s religious orders and Roman Curia officials — for four days of listening to speeches, survivors’ testimonies, discussions in small groups, a penitential liturgy and Mass.

In addition to the handful of survivors who spoke at the summit itself, dozens of survivors from around the world gathered in Rome in solidarity with one another and to speak to reporters and to individual bishops. Twelve representatives of the survivors were invited to meet with the summit’s organizing committee.

Father Lombardi told journalists that the handbook would list a set of guidelines and “will help bishops around the world clearly understand their duties and tasks” when handling cases of abuse.

The text in English can be found at http://www.vatican.va/roman_curia/congregations/cfaith/documents/rc_con_cfaith_doc_20200716_vademecum-casi-abuso_en.html.